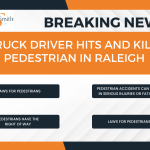 A serious accident resulted in one death and other injuries in Raleigh. A truck driver veered off the road and hit a pedestrian walking nearby. The driver did not immediately stop, but instead overcompensated and ran across all lanes of traffic, ending by hitting a tree on the opposite side of the road. The fatal crash happened at about 5 pm on Fox Road near Thales Academy in Raleigh. The 65-year-old pedestrian died, and the passenger of the truck was injured in the accident. The driver was taken into custody and charged with DWI along with several other charges.

Pedestrians Have the Right of Way

END_OF_DOCUMENT_TOKEN_TO_BE_REPLACED

Truck accidents can be extremely dangerous and this was the case with a serious accident that occurred with a logging truck on US Highway 601 in Surry County. The big rig was carrying a large load of logs when it crossed the center line and flipped over. The accident caused the truck to spill its logs onto the roadway. One of the large timbers hit a Nissan traveling in the opposite direction and caused it to crash into an embankment, killing the driver and the child passenger. Both were pronounced dead at the scene.

END_OF_DOCUMENT_TOKEN_TO_BE_REPLACED

A serious crash led to the death of a truck driver and a toddler near Fayetteville, NC. The crash happened on Interstate 95, causing the northbound lanes of traffic to be closed for hours while police investigated and cleared the accident. According to North Carolina State Police, the crash involved a semi truck and a Dodge Ram van. Investigators report that the driver of the semi truck failed to slow down when he encountered a traffic delay ahead. The truck swerved and hit the van, which was also traveling in the same direction. In addition to the fatalities, a woman was transported to the hospital with non-life-threatening injuries.

END_OF_DOCUMENT_TOKEN_TO_BE_REPLACED

There are more than 12 million commercial trucks on America’s roads. Most drivers will share the highway with trucks on a daily basis. Truck accidents are often more serious than accidents that involve other types of vehicles. Truck crashes are more likely to result in severe injuries or fatalities, often to the occupants of other vehicles. Trucks are large and carry heavy loads, making them difficult to maneuver and stop. If you were hurt in a truck accident you may want to consult with an experienced personal injury attorney as soon after the crash as possible.