In a terrible freak accident in Taylorsville, NC, a man who was simply mowing the lawn ended up losing a hand, though not because of anything involving the lawn mower. Instead, the source of his terrible injury was a small plane that landed on top of him. 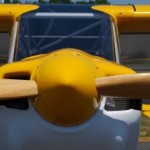 Edward Sisson, an 84-year-old from Crossville, TN, was piloting the small plane. Sisson was preparing to land the single-engine plan at Taylorsville Airport Saturday afternoon when he put the plane down on a grass runway directly on top of 74-year-old John Rufty.

Police say that while Sisson was an experienced pilot, the Taylorsville Airport lacks an air traffic controller so there was no one around to communicate with either the pilot or the lawn mower. Sisson was reportedly heading east prior to landing, the same direction as the unlucky lawn mower. Rufty was unable to hear the approaching plane given the noise of the lawnmower and never saw it because it came in behind him. Sisson apparently never saw Rufty either, at least not until moments before impact.

Emergency responders have revealed that the propeller of the plane cut Rufty, leading to a horrible injury that ultimately severed his left hand. The force of the accident was so great that it caused both the plane and the lawn mower to flip over. Sisson was able to walk away from the accident scene without injuries. Tragically, Rufty had to be taken by air ambulance to Baptist Medical Center in Winston-Salem where he was listed in critical condition.

So far the National Transportation Safety Board and the Federal Aviation Administration say they will investigate the crash. The owners of the private Taylorsville Airport have not yet released a statement regarding the accident or whether they intend to make any changes to ensure such accidents don’t happen in the future.

No criminal charges have been filed against Sisson as authorities say they need to piece together a more complete picture of what happened before they will know whether any charges are appropriate.