The family of a young man pledging the Delta Sigma Phi fraternity at High Point University who died after they say he was subjected to vicious hazing has filed suit against the school and the fraternity. The family of Robert Tipton, Jr. filed the lawsuit after their son was found lifeless back in March of 2012 in an off-campus apartment. 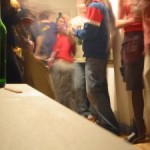 According to news reports, the family claims that the day before he died, Tipton was told he had to attend what the fraternity dubbed a “counseling session” at the off-campus apartment. After arriving, they say that members of Delta Sigma Phi proceeded to viciously haze the young man at the direction of the fraternity’s pledge master.

Specifically, the suit claims that fraternity members assaulted and battered Tipton, resulting in blunt force trauma to the young man’s head. An autopsy revealed contusions to the boy’s head, face and neck, but noted that oxymorphone poisoning officially caused his death. A separate report disagreed with the official cause of death and said that Tipton died due to aspiration of gastrointestinal contents and that a concussion caused by the hazing likely precipitated the aspiration.

The lawsuit says that Delta Sig’s pledge master, Michael Qubein, is also the son of the school’s president. So far, the university has said only that it was saddened by the loss of the young man, but that it believes the lawsuit naming the school is baseless.

After Tipton’s death the case appeared to fall off the radar but gained renewed attention last year when an investigative firm that was hired by a lawyer working for Tipton’s mother ran an ad in the High Point Enterprise offering $10,000 to anyone who was able to provide useful information regarding the circumstances of Tipton’s death.

The lawsuit claims that school security is also liable in the matter given its lack of action controlling the wild and illegal behavior of Delta Sigma Phi. Court papers allege that High Point security officers were specifically warned by their superiors to use he lowest level of enforcement possible when dealing with Delta Sigma Phi and Michael Qubein given his father’s prominent position at the school. The suit also claims that Qubein found and then deleted text messages from Tipton’s phone after his death, an attempt to hide evidence of wrongdoing.