Parents in Rowan County, NC had a scare when a school bus full of young children was involved in an accident with another car early Tuesday morning. The accident happened around 9:45 a.m. when the bus was driving down Woodleaf Road just outside Salisbury. 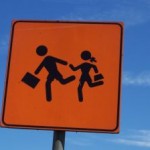 Officials with the school district say the bus was bringing 28 children back to school after the group had gone to see a play in downtown Salisbury. As the bus neared the school, an oncoming car crossed over the centerline of the two-lane road and hit the bus head-on. The accident could have been even worse, according to school officials, because a second fully loaded bus was right behind the first bus. Thankfully, the quick thinking driver of the second bus was able to stop in time to avoid colliding with the wreckage of the first bus.

The accident alarmed parents who received calls from the school district informing them that their children had been involved in an accident. Many raced to the school to check on their children and say they were relieved the accident wasn’t worse. The bus driver and chaperones are credited with taking action to quickly identify injured students and keep everyone calm while waiting for emergency responders to arrive.

So far there is no word on what caused the other car to drift out of its lane or whether the woman would face charges in connection with the crash. The accident does reveal the serious damage that can come from head-on collisions. In head-on accidents, two vehicles moving in opposite directions collide with one another, a type of accident that results in an immense amount of energy being exchanged between the vehicles.

Head-on accidents frequently result in serious injuries and death because of how much force is involved in the collisions. Crossing over a centerline is a common source of such collisions and is why drivers should be especially vigilant when driving along two-lane roads. Be sure to avoid distraction because taking your eyes off the road for even a moment could spell disaster if an oncoming car happens to be close by.