A woman who is married to an American National Football League player has sued the investment firm that terminated her employment, alleging that her dismissal was based on racism and sexism. 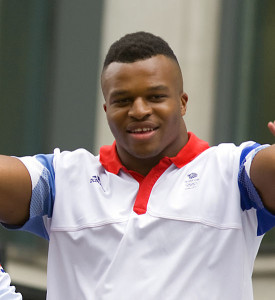 The woman—twenty-seven-year-old Philippa Okoye—said that a coworker at financial consulting firm deVere Group said he thought it was “disgusting when white women go out with black guys.” At the time, Okoye was dating Lawrence Okoye, a British Olympic discus thrower who now plays defensive end for the NFL’s San Francisco 49ers. Lawrence and Philippa Okoye have since married.

Before they married, however, another coworker told Okoye not to adopt her husband’s surname, saying that people would “think [she] was black.” Okoye alleges that her boss—Benjamin Alderson—agreed with the coworker, saying a “black-sounding” name would not be good for business, according to the Daily Mail.

Alderson is a senior area manager at deVere, according to Okoye’s lawsuit, filed Monday in federal court in Manhattan. deVere has offices around the world, with three located in the United States—in New York, San Francisco and Miami. According to Okoye’s lawsuit, Alderson said he wanted to pattern his office after offices shown in feature films Wolf of Wall Street and Boiler Room.

Those films depict rampant workplace drug and alcohol abuse as well as office parties with strippers and prostitutes.

In her lawsuit, Okoye alleges that when she began working at deVere, she was the only woman employed in the office, and that Alderson encouraged her to put up with the “banter” and to not be “sensitive.” She alleges that coworkers played a game in which they rated each woman who came to the office based on how “f***able” they were, according to the New York Post.

Alderson suggested that Okoye’s husband—who was working across the country at the time—was cheating on her, asking her to name “how many cheerleaders” her husband had slept with in a given day, “among many other vulgar, racist insults,” according to the Post.

When Okoye complained about the abuse, she said, she was demoted, and Alderson began mocking her Christian faith, calling her a “Bible basher” and singing Christian hymns whenever he walked past her desk.

Neither Alderson nor deVere had responded to the lawsuit or commented as of Tuesday morning.