Police chases are not a rare occurrence on America’s roads. Unfortunately, those high-speed chases often lead to injuries among not only officers and suspected offenders, but also innocent drivers, pedestrians, and bystanders. 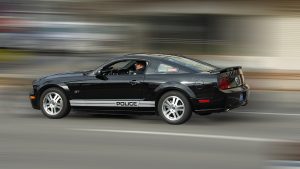 According to a 2017 study by 24-7 Wall Street, North Carolina ranked 10th in the country in hot pursuit-related fatalities (240 deaths between 1996 and 2015). A recent high-speed chase in Charlotte, North Carolina, highlighted the problem of casualties in hot pursuits in the state.

As reported by WSOC-TV, four people were injured, including a North Carolina state trooper, following a high-speed chase. The pursuit started at around 3 a.m. and ended in a south Charlotte crash at 3:30 a.m. The crash occurred at the intersection of South Boulevard and East Woodlawn Road.

The trooper tried to stop a motor vehicle on Interstate 85 for exceeding the speed limit and not displaying a tag, but the driver – identified as a 16-year-old – refused to pull over. The motorist led the trooper on a high-speed chase. At one point, the driver was speeding in the wrong direction of I-485. The pursuit ended when the offender crashed into a traffic sign and slammed a parked vehicle before speeding up and hitting a power pole.

As a result, three people were hospitalized with critical injuries. The driver, who was driving a stolen Chevrolet Malibu, was charged with speeding and reckless driving, possession of a stolen vehicle, and felony flee to elude.

What are Hot Pursuit Policies in North Carolina?

In 2017, the North Carolina Highway Patrol changed its car chase policy to reduce the potential damage of hot pursuits on the state’s roads. According to WSPA, the state’s Highway Patrol restricted troopers from pursuing vehicles and using the pursuit intervention technique (PIT) maneuver if the vehicle is traveling over 55 mph. Troopers often use the PIT maneuver to stop a car with the force of their own vehicle.

After the policy change, troopers have been allowed to pursue suspected offenders at will if they believe that the motorist committed a felony. Despite these measures, hot pursuit policies vary greatly from department to department in North Carolina.

In fact, the NC Highway Patrol’s police chase policy is considered one of the most aggressive in the state. Troopers can use a variety of techniques to stop the suspect, from PIT maneuvers and roadblocks to the use of spiked strips. The Highway Patrol also breaks down suspected offenders into three categories based on the level of threat that these violators pose to the public:

At the same time, hot pursuit policies in city police departments tend to be more restrictive. For instance, a police officer in Raleigh does not have to chase a motorist unless they have committed a violent felony.

If you have been hurt in the course of hot pursuit in North Carolina, seek legal help from our Charlotte personal injury attorneys. Contact Arnold & Smith, PLLC, to evaluate your options. Call at (704) 370-2828 to receive a consultation with our lawyers to explore your legal options or fill out our contact form. Now taking cases throughout North Carolina with offices in Uptown Charlotte, Mooresville and Monroe.