Although high-speed chases might be fun to watch on the news or reality shows, in reality they can have devastating consequences that call into question the blanket discretionary power police have to pursue suspects at dangerous speeds. A Pennsylvania woman is suing her local police departments for negligence after a suspect being hotly pursued by officers in a high-speed chase erratically accelerated through an intersection during rush-hour traffic caused a three-car pile-up and multiple injuries. 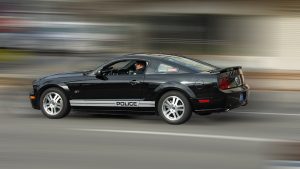 In her lawsuit, Donna Jackson alleges that she has suffered brain hemorrhaging, a cerebral concussion, herniated discs, and vision problems, among other injuries.

The police chase was an effort to apprehend Douglas Johnson, 54, who police suspected of vehicle theft. Johnson, who has since pled guilty to receiving stolen property and fleeing the police in the incident, admitted to stealing a 2007 Dodge Nitro from a gas station. Several days later, police spotted him driving the stolen vehicle and signaled for Johnson to pull over. After he refused, the police gave chase in what became a lengthy, high-speed pursuit that began in the township of Hanover and proceeded into the neighboring city Wilkes-Barre about four (4) miles away.

The injured woman alleges that the police officers negligently pursued their suspect by exceeding speed limits, disregarding traffic signs and signals, failing to follow the rules of the road, and maintaining the dangerous pursuit through commercial districts and residential neighborhoods during rush hour traffic.

The case certainly does highlight considerations police should take into account when choosing whether or not to pursue or continue a high-speed chase. High-speed motor vehicle pursuits by police frequently reach a dangerous tipping point where one must—or should—weigh the potential advantages of continuing pursuit against potential consequences. In many cases, including the one here, the suspected crime for which a person is being chased does not involve violent behavior that is necessarily physically harmful to another person. The officers pursuing Johnson, if Jackson’s allegations about their negligent driving turn out to be true, chose to embark and continue on the hair-raising chase to pursue someone suspected of auto theft—a serious crime, to be sure, but one worth endangering the lives of countless others over?

Law enforcement has an obvious vested interest in pursuing those it suspects of crimes—police pursuit is a deterrent to crime in general and it would significantly gut the power of law enforcement to not be able to pursue any suspect via vehicle.

If you’re wondering why Jackson is legally blaming the police for something that was technically Johnson’s fault, there are a number of potential answers. First, court records indicate that Johnson also plead guilty to nine other counts of robbery for separate incidents when he was in court for the current offense. For all his convictions he is serving eight (8) to 16 years in state prison. Pursuing damages from someone serving a years-long prison sentence can be a moot endeavor if the defendant does not have the financial resources to pay any court-ordered compensation to the victim.

In addition, the police arguably had an enhanced duty—protect and serve is in the job title, after all—to pursue the suspect in a non-negligent manner. In the chain of causation, one could argue that the police’s pursuit caused Johnson to drive even more erratically and quickly. Yes, the police were just doing their job—but at what cost?