The jury on DeShawn Franklin’s civil rights case went to the trouble of finding in his favor. That made sense. Franklin had been an 18-year-old high school senior asleep in his bed when police officers stormed his family’s home in the middle of the night in 2012 and woke him up. The bewildered and freshly-conscious teen resisted, only to be punched multiple times; three of the officers’ blows landed on his face. Officers Tasered Franklin, fired their stun gun on him and dragged him out of his bedroom before realizing he was not the person they thought he was. Even after realizing this, the officers handcuffed him and put him in the police cruiser for resisting arrest. 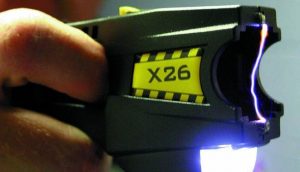 Franklin was released shortly after, but the night’s events were ones that a person does not escape unchanged.

The jury disagreed. The $18 in damages included $1 for each of his parents for the unconstitutional entry into their home.

The jury could have found in favor of the police officers and city officials the Franklins sued—then, Franklin and his family wouldn’t have been entitled to any damages whatsoever. What the jury opted for instead had the same practical result, but with an added layer of insult to injury.

The now-22-year-old Franklin still has no criminal history. What he does have is distrust of law enforcement that runs so deep he declined any press photos of his face when the verdict broke out of fear that he would be recognized.

The police department’s internal investigation found that the officers unlawfully entered the Franklins’ home when they barged in without a warrant or permission. It also found the officers used excessive force against the teenager.

One of the attorneys for the police officers, Peter Agostino, told press that the Franklins received such nominal damages because they were unable to show specific emotional distress. This is a common issue in personal injury actions—if the plaintiff does not allege how the defendant’s negligence or intentional acts emotionally damaged them, it can be difficult to recover, regardless of how improper the defendant’s actions may have been.

Meanwhile, the Franklin’s attorney said that damages for similar cases are typically between $100,000 and $300,000. The city had offered to settle for $15,000, but the Franklins had opted instead to go to trial, hoping for a more appropriate sum.

The law enforcement officers involved were disciplined internally for their actions, according to their superiors. This included a written reprimand, although the officers’ past actions raise questions as to the effectiveness of this form of punishment.

The same three (3) police officers involved in Franklin’s case were also named in a 2013 case filed on behalf of a 7-Eleven store clerk with a learning disability. According to the complaint in that case, the officers challenged the clerk to eat a teaspoon of cinnamon in exchange for $30 and videotaped him complying before posting the video to YouTube for the then-popular “cinnamon challenge.” The clerk vomited for several hours after.