A 32-year-old American author who wrote a survival guide for Spain’s Pamplona bull-running festival was gored on Wednesday by a 1,320-pound bull named Brevito during the annual San Fermin festival. 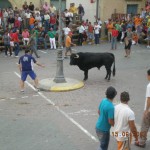 The man, Bill Hillman, was skewered in the right thigh by the bull’s horn; the bull also gored a 35-year-old Spanish man in the chest. A friend of Hillman’s said the bull’s horn had missed the artery in Hillman’s right thigh and that Hillman had undergone surgery at a local hospital and was expected to survive.

Hillman co-authored a 2014 e-book called “Fiesta: How to Survive the Bulls of Pamplona.”

Dozens of people were injured in the annual bull-running, held on a narrow, half-mile course. The bulls took under four minutes to run the course before being led into a bull ring to face matadors and death. The most recent human bull-run fatality came in 2009, when a Spanish man was gored to death.

Hillman may be lucky, but if he thinks he has any legal claims, he is out of luck. Of course he couldn’t sue the bull, but could he sue Pamplona or the outfit that organizes the bull runs? No. The reason why may seem obvious, but in the law, sometimes obvious answers lead to absurd results.

Have you ever been hurt and someone told you that you deserved it? That might have been an insult on top of your injury, but it’s a feeling you ought to acquaint yourself with if you feel you have a legal case against someone but your injury was partly your fault. In North Carolina, even if you were a little bit at fault, your case can be dismissed. Courts in the Tar Heel State do not apportion blame between victims who are partly at fault and those who injure them, who are mostly at fault.

North Carolina is one of the few states in the United States that still employs a doctrine known as pure contributory negligence. In many personal injury cases, it makes or breaks the case. If you admit you were to blame, in part, for your injury, many North Carolina lawyers won’t take your case.

It seems obvious that had Hillman been injured in a bull run in North Carolina, he ought not to be allowed to sue someone for his injury. He should have known better.

But what if an injured party is one-percent at fault? A person crossing a street is struck by a careless and reckless driver who is drunk. The person is jaywalking, is nowhere near the crosswalk, but the driver could have and should have slowed down. The walker is out of luck, despite the driver’s negligence. If you are one-percent at fault, in North Carolina you have no case.

If you believe you or someone you know has been injured and may need to speak to an experienced personal injury attorney, please do not hesitate to contact me to set up an appointment today. If you or someone you know has any questions regarding potential personal injury claims, feel free to contact the experienced personal injury attorneys at Arnold & Smith, PLLC in Charlotte, North Carolina for a free consultation. Call toll free at (955) 370-2828 or click here for additional resources.