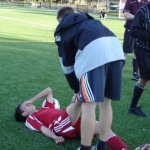 The NFL has changed some of its rules to cut down on hard hits to players’ heads. And the league has sought to resolve a legal dispute with some 4,500 former players who sued the league claiming they had developed neurological infirmities as a result of football-related head injuries. A judge who rejected earlier versions of the settlement—which limited damages to $765 million—approved a revised settlement that places no cap on damages.

The World Cup injuries and the raising of the concussion alarm shows sports-related concussion injuries are not just a concern for American football. The White House called sports-related brain injuries an “alarming trend,” and Pres. Obama said “parents, coaches, clinicians and young athletes [need] the tools to prevent, identify, and respond to concussions.”