A court battle over legal fees stemming from a deadly 2009 car accident ended last week in Philadelphia, Pennsylvania. Daniel Lopez Ortiz was killed when his car was struck by a box truck in April 2009. Mr. Ortiz’s widow, Maria Fonseca, filed two separate law suits relating to Mr. Ortiz’s death. Ms. Fonseca engaged at least four different law firms to litigate her deceased husband’s claims—one a negligence claim against the driver of the box truck and the second a so-called “crashworthiness” claim against the automaker. 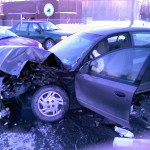 Ms. Fonseca’s counsel obtained significant awards on behalf of the Estate of Mr. Lopez, short of trial. Before the settlements cleared, however, the lawyers and law firms that represented Ms. Fonseca and Mr. Lopez’s estate brought a series of legal actions against each other seeking a cut of the contingency fees earned in the cases. The law firms ended their actions against each other before jury selection began on Aug. 13.

While negligence lawsuits stemming from automobile accidents are common, so-called “crashworthiness” lawsuits may be less familiar to plaintiffs in North Carolina. The “crashworthiness” doctrine was first recognized some 40 years ago.

The doctrine refers to the “crashworthiness” of an automobile. When a crash occurs, oftentimes a driver or passenger suffers two separate impacts, the first impact caused by the crash itself and the second occurring when the driver of passenger impacts the interior of one’s own vehicle. If a person’s injuries are made worse by the second impact, the maker of the automobile may be held liable for design flaws that rendered a driver or passenger susceptible to injury in the event of a crash.

The first case to recognize crashworthiness was Larsen v. General Motors Corp., a 1968 case in which a plaintiff suffered severe injuries when the steering column in his Chevrolet Corvair thrust backwards during a head-on collision, striking him in the head. In that case, the 8th Circuit Court of Appeals held that car accidents are inevitable, that automobile makers have a duty to reduce the risk of injury to drivers and passengers in collisions, and that automobile makers should be liable for any injuries caused by a design defects in vehicles involved in crashes.

In a seminal case in North Carolina, Hinkamp v. American Motors Corp., the United States Federal Court for the Eastern District of North Carolina dismissed a plaintiff’s crashworthiness claim in a case in which the plaintiff’s car veered off an icy road and rolled over, leaving the plaintiff with permanent brain injuries. Applying traditional tort principles, the court held that the plaintiff’s own negligence in driving-while-impaired barred him from any recovery in the case.

Unfortunately for Mr. Hinkamp, North Carolina also applies the doctrine of strict contributory negligence in accident cases. Since he was partially at fault, his case was dismissed.