Fox Sports correspondent Erin Andrews just received a $55 million judgment from the Tennessee jury in her personal injury case against the man caught stalking her through hotel-wall peepholes back in 2008. As monumental as this verdict sounds, this does not mean Andrews will actually get anything close to the $55 million. A defendant claiming he is broke, tax codes, attorney’s fees and a likely appeal are all going to severely undercut whatever amount the sportscaster is able to take home. 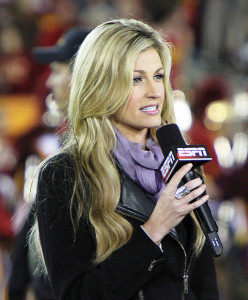 The stalker, Michael David Barrett, pled guilty to interstate federal stalking charges in 2009 for following Andrews, who worked for ESPN at the time, to at least three cities and renting rooms next to hers. He then created peepholes in the adjoining walls and shot video of her naked which he then uploaded onto the Internet. The videos were viewed millions of times.

Barrett’s defense in court? He claimed that his actions were mitigated by the boost Andrews’ career received from the media exposure his illegal activities created.

The court was unimpressed. Barrett was sentenced to two and a half years in prison, the maximum allowed under the law. He was also ordered to pay $7,366 in restitution to Andrews and serve three years of supervised probation upon his release, during which he was prohibited from contacting Andrews or her family and friends.

The federal prosecutors in Los Angeles agreed to not pursue further charges against Barrett, but this doesn’t mean the man is immune from prosecution in other states. Prosecutors claimed at sentencing to have 32 videos showing that the defendant had victimized at least 16 other women in ways almost identical to Andrews, and had conducted 30 background checks on the Internet that can produce home addresses and birthdays. State prosecutors in the states where those activities occurred could still decide to press charges.

Andrews filed civil suit against Barrett in 2011 for negligent and intentional infliction of emotional distress, invasion of privacy, negligence and intrusion of seclusion. Her complaint claimed permanent emotional distress and embarrassment. At trial Andrews testified as to how she fears for her life every time she stays at a hotel now (something her job requires her to do on a regular basis) and how her daily life has been drastically affected by the invasion.

Barrett, 54, was ordered by the jury to pay $28 million of the judgment. However, news reports after the verdict was released showed that Barrett just moved in with his father’s basement in Portland. The former insurance executive claims he has no money to pay the judgment. If this is true it would mean he is “judgment proof,” legal jargon for “broke.”

In the same suit, Andrews also sued the Nashville Marriot where Barrett stalked her on more than one occasion for negligent infliction of emotional distress. (The parties named in this part of the lawsuit are West End Hotel Partners LLC and the hotel’s management company. Because the hotel was a franchise of the Marriot, the Marriot was not liable.) Andrews sued the hotel because its records showed that they repeatedly complied without question with Barrett’s suspicious requests for the room next to the sportscaster.

The jury ordered West End and the hotel management group to pay the remaining $27 million of the $55 million judgment to Andrews. Andrews will assumedly have more luck collecting her damages from these entities, whose pockets are undoubtedly deeper than those of someone living in their parents’ basement.

However, other factors might be curtailing Andrews’ take-home portion of those damages too.

Monetary awards this high in cases with no physical damages are almost always appealed. The opposing parties in this case have all but declared their intent to appeal the verdict, calling it excessive. It is likely that Andrews’ legal team will work out a settlement to avoid risking having the ruling reversed or the amount significantly lowered on appeal.

Speaking of her legal team, attorneys’ fees are going to demand a significant chunk of whatever Andrews receives.  In addition, and perhaps most notably, in personal injury cases that award damages for emotional distress but no physical injury, as is the case here, the damages are taxed by the IRS. This will diminish whatever she receives by almost half.

If you are facing a personal injury, it is important to speak with an experienced personal injury attorney to determine your likelihood of recovery and fight for your rights in court.