Politicians, celebrities and school districts around the United States have joined forces in a campaign to end bullying. That campaign, however, has been geared at ending bullying of students in American schools. 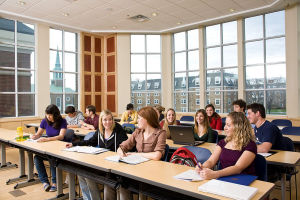 Now one New Mexico teacher claims bullying from students has forced her into early retirement, and she says no one is willing to do anything about it.

Sharon Moran retired last week from Albuquerque, New Mexico’s McKinley Middle School after she said one student threatened to kill her. The 47-year-old told the Daily Mail that she had been working as a teacher for twelve years.

The death threat, Moran told Albuquerque’s KOAT, was the final straw, adding that several of her students had turned her classroom into a “hostile environment… that made her fear for her safety.”

Earlier this year, 71-year-old special education teacher Vincent Criscuola was punched several times and thrown against a wall after he intervened in a fight between two students at McKinley. Criscuola had to miss time from work after the incident to recover from spinal strain, a neck strain and a hip injury. He told the Daily Mail that he returned to work at McKinley even though he did not feel safe there.

Moran said neither administrators at McKinley nor in the Albuquerque Public Schools administration had done enough to address threats to teachers at the school. “I do feel like I’m being intimidated and I feel like I’m bullied,” Moran told the Daily Mail.

The National Education Association estimates that as many as one in four teachers are bullied, but much of the bullying the N.E.A. has chronicled has involved bullying of teachers by fellow adults—administrators, coworkers and parents. Lawsuits like the one filed in Auburn, Washington last year by six former teachers against their old principal—who they alleged engaged in a campaign of “intimidation, harassment and bullying”—are somewhat common.

Reports of students bullying teachers are less common. A writer at The Educators Room wonders whether incidents involving student-bullies “go unreported because the teacher feels powerless and victimized to the point that they wonder if there is any purpose to even saying anything about the behavior within the classroom.”

Bullying of teachers can extend beyond classroom walls, according to NoBullying.com. That site reported last year on a “new epidemic” of teachers being “cyberbullied” online by disgruntled students. Bullies can use “countless social media pages… to embarrass and harass teachers and other faculty members in schools,” and can in some cases “take control of the teacher, not only in the classroom, but in their everyday lives, causing them to fear their jobs, and fear going out in public.”