A former student of a Utah teacher accused of engaging in sexual affairs with several of her students has brought suit against the school district that hired her, alleging that the district is responsible for emotional trauma caused by the encounters. 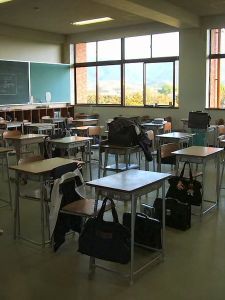 The former student, who was seventeen at the time of the sexual encounters with thirty-five-year-old Brianne Altice, is seeking $674,000 in his lawsuit.

Altice faces fourteen felony charges related to her sexual activities with at least three students. Her sexual encounters with one student occurred “while she was out on bail for charges relating to the first two students,” according to the Daily Mail. A judge revoked Altice’s bail in January, and she remains in jail awaiting her next court date.

In his lawsuit, Altice’s former student alleges that his relationship with Altice started out as classroom flirtation, followed by an exchange of text messages, kissing and then sex. The school district knew about Altice’s behavior, he alleges, because it reprimanded her after discovering photos showing her engaging in inappropriate contact with students.

Charges were brought against Altice in October 2013 after she allegedly admitted to engaging in sexual relations with a different student. That student said the criminal charges against Altice are “ridiculous” and that she does not deserve to be prosecuted for her actions.

Altice’s attorney said she is innocent, and that she only confessed to having sex with students after eight to ten police interviewed her at her home for four hours. Last year, however, the attorney—Edward Brass—appeared to acknowledge that Altice had engaged in sexual contact with at least one student or former student, saying that the student pursued her and “She repeatedly refused and declined his advances until he ultimately broke down her resistance.” Altice faces life in prison if she is convicted.

The lawsuit brought by one of Altice’s alleged victims alleges that the school district failed to “properly monitor, train or retrain Altice” and failed to properly monitor her, according to FOX’s Salt Lake City, Utah affiliate. The lawsuit suggests that the district should have fired Altice when it discovered photos of her engaging in inappropriate contact with students.

The school district’s failure to appropriately discipline Altice led to her sexual contact with the plaintiff-former student, and that contact, he alleges, caused him to suffer “mental, psychological, physical and emotional damages.”

In the lawsuit, the former student claims that Altice enticed him away from school grounds and drove him to her home, where the sexual contact occurred. Altice was married at the time, according to the Daily Mail. Her husband has since filed for divorce.