When the online world learned that 56-year-old Detroit man James Robertson was spending eight hours per day walking to work and back, so-called crowd funders raised some $360,000 in donations for the man. 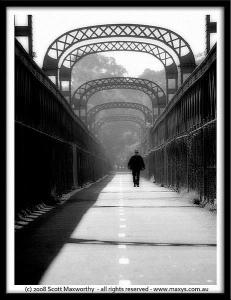 But just as the online community stepped up for Robertson, an ex-girlfriend and old landlord have stepped in demanding a cut of his newfound wealth.

Robertson said he had been born and raised in Detroit’s New Center area, but as soon as he had an opportunity to move out of it, he said he took it, cutting all ties to the area—including ties with 60-year-old Tanya Fox.

Fox claims that Robertson damaged the house he rented from her for fifteen years and had promised to give her $50,000 to make repairs. The only damage she cited publically was grease that she said Robertson spilled on apartment walls.

When Robertson went to Fox’s house to collect his belongings, “Fox, her adult son and her ex-husband became so aggressive toward Robertson about money that police had to stand guard,” according to The Root. Ultimately Robertson had to obtain a restraining order against Fox in an effort to stop her harassment. Fox told the Daily Mail that she will challenge the restraining order in court.

Robertson said he fled the New Center area after learning of the murder of an 86-year-old Detroit man who had been killed three days after news broke that he won $20,000 in a lottery game.

Detroit Police Captain Aric Tosqui said that Robertson was aware of that killing and had become fearful for his safety. Tosqui said that his department was also concerned and that crime-prevention specialists had offered Robertson temporary living quarters until he could find a new apartment.

A friend of Robertson’s interviewed by the Detroit Free Press said that other residents at the boardinghouse where Robertson had been living heard about the donated money and “wanted a share of his windfall and threatened Robertson with violence.” Detroit police confirmed that people had been asking Robertson for money, even before he actually received any of the funds donated to him online.

Ultimately Robertson was able to land a new, suburban apartment. He is still working at the same Rochester Hills factory where he earns $10.55 per hour.

After he was donated a Ford Taurus by a local dealership and secured the funds donated by strangers in the online community, a team of financial experts offered to donate their services to help Robertson manage his money.

Rebecca Sorensen, senior vice president for wealth management at UBS Financial Services, said most of the donated funds have been placed in a trust “that will someday provide an income stream when he retires.”