A Union County Sheriff’s Deputy was killed early Wednesday morning after a tractor-trailer jackknifed and tipped over, falling on the deputy’s car and crushing him to death. 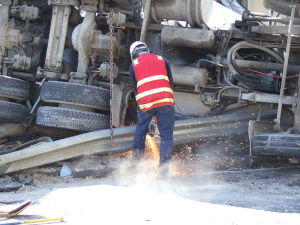 The deputy—identified by the Union County Sheriff’s Office as Sgt. Jeffrey Wayne Greene—was sitting in the left-hand turn lane on westbound U.S. 74 at the intersection of S. Sutherland Avenue in Monroe when a truck came barreling over a low hill in the right lane.

The truck’s driver—Eddie Ray Weeks of Fayetteville-based Weeks Trucking—swerved to avoid striking a tanker truck stopped in the right lane, causing Weeks’ truck to jackknife as it slid forward, falling on Sgt. Greene’s patrol vehicle and partially on a Kia vehicle sitting in the left traffic lane.

Weeks and the driver of the Kia were taken to nearby Carolinas Medical Center-Monroe for treatment. State Troopers said Sgt. Greene was crushed inside his vehicle and died on the scene.

Weeks will be taken after his release from the hospital to the Union County Jail, where law-enforcement officials said he would be charged with misdemeanor death by vehicle.

Witnesses told Charlotte’s WSOC-TV that Wednesday’s crash was only the latest in a string of crashes at the dangerous intersection. One man said drivers—including those operating trucks—drive too fast for conditions in and around the intersection. In April, a trucker hauling chicken cages ran off the highway and slammed into a Rite Aid pharmacy at the same intersection.

According to the North Carolina Department of Transportation, nearly a third of all traffic fatalities in 2012—the last year in which traffic statistics were available—were related to speeding.

Sgt. Greene had been employed by the Union County Sheriff since 2004. Prior to that, he had served in the United States Air Force and Marines. Sheriff Eddie Cathey said the Sheriff’s Office family was grieving the loss of a good friend and citizen.

The stretch of U.S. 74 that runs through Union County has been the scene of numerous wrecks and fatalities over the years. In August, a 70-year-old Marshville woman and her boyfriend were killed near the highway’s intersection with John Moore Road when a driver crossed into their lane and struck their vehicle head on. The driver, Jose Esteves Herrera, was charged with two counts of second-degree murder.

Two men died in a fiery head-on collision not far from that crash site in December of 2012, according to the Winston-Salem Journal. In that crash, 52-year-old Patricio Valdivieso crossed the median and struck a sports-utility vehicle driven by 58-year-old William Jerry Odom. Both men died on the scene.

Witnesses on the scene of Wednesday’s crash said something needs to be done to reduce drivers’ speed in the area.