“At some point, something told me, grab a Big Mac.” 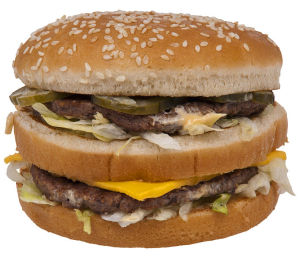 Those words—and that decision—would forever change the lives of two New York men. Officer John Florio was on duty and in uniform when he pulled into a Bronx, New York McDonald’s drive-thru late one evening in January 2005. Florio ordered a Big Mac, but when he bit into the patty he discovered he’d been served something he hadn’t ordered: shards of broken glass mixed into the sandwich’s “special sauce.”

They ushered then-18-year-old McDonald’s worker Albert Garcia to a back room, where he admitted to “giving Florio something extra in his order.” In a statement he wrote for investigators, Garcia said he “put the little pieces of glass into the burger as a joke.”

By the time—five years later—Garcia’s criminal case came on for trial, Garcia had recanted and his lawyer—Raymond J. Aab—accused Officer Florio of planting the glass in the burger himself in order to obtain some quick settlement cash from the fast-food chain. Within two weeks of the incident, Florio sued McDonald’s asking for $6 million in damages.

At Garcia’s trial, jurors were told how doctors at the Long Island Jewish medical Center found no cuts in Officer Florio’s throat, and X-rays were negative. Florio testified that he found five shards of glass in his stool that evidently passed through his body without causing injury.

Garcia’s lawyers were able to depose Florio and other officers as a part of Florio’s lawsuit against the food chain, and used the testimony from those depositions to uncover inconsistencies in Florio’s accounts of the incident.

After a three-week trial, a jury took just 30 minutes to acquit Garcia.

But that wasn’t the end of the story.

Florio ultimately settled his lawsuit against the owners of the Bronx McDonald’s franchise for just $15,000.

Garcia, in turn, sued Florio and the City of New York, claiming he made a false confession because he was scared.

“I gave up mentally. I was exhausted. I was hungry. I was thirsty. The only thing I was thinking about was going home,” Garcia said.

A police spokesman called Garcia’s lawsuit “dubious.” A Bronx judge agreed, dismissing the lawsuit because, he ruled, police officers had probable cause to arrest Garcia based on his confession.

A New York State appellate court upheld the dismissal this past March. Garcia appealed that decision to the State’s highest court—the New York Court of Appeals. That court agreed to consider Garcia’s appeal, setting the stage for a settlement of the lawsuit.

Ultimately the city’s Law Department concluded that settling with Garcia was better than continuing to litigate the case.

Garcia will receive $437,000 in exchange for dropping the case, before costs, attorneys’ fees and taxes.