When personal injury cases make it on the front page it’s usually for one of two reasons. Either the case is a true tragedy where victims suffered unimaginable harm, or the case seems ridiculous, serving as an example of a tort system seemingly run amok. When the headlines fall into this latter category it can skew people’s idea of what a personal injury case is. All they see are the silly headlines, lacking entirely in legal analysis or context. Rather than allowing the media to portray every personal injury as if it were assured of success no matter how odd, it’s important to understand that the majority of these cases fail because the law imposes serious burdens that plaintiffs must confront before they’re able to collect damages. Though the news might lead you to believe it’s easy to cash in every time you bump or bruise yourself, the reality is far more difficult. 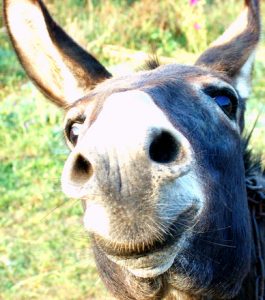 The problem for Kimberly is that the donkey statue was smooth and, apparently, rather slippery. After climbing on top, she soon slid right off and fell onto the floor. The fall was serious enough to fracture her spine. Kimberly has since filed suit against the restaurant and is asking for damages in excess of $15,000 (though it’s safe to say this is far less than will actually be requested). According to the court papers, Kimberly alleges that the restaurant is liable for her injuries. She says the donkey lacked a ladder, steps, a saddle or any other safety feature.

So far this sounds just like the kind of case you’d see in the news, someone hurts themselves in an unusual way and sues to collect damages. The end. But wait, what exactly is she suing for? What does she need to prove to win? How would the defendant respond? Let’s discuss that in a bit more detail. First, Kimberly has filed a personal injury case, sure, but what type? This kind of case would involve suing the Mexican restaurant for alleged negligence. Kimberly will likely claim that the restaurant knew or should have known that injuries could result from the donkey statue and that they should’ve taken steps to protect customers from the danger.

So what does Kimberly need to prove for her to win such a case? To show fault based on negligence, a plaintiff typically has to prove four things. First, that the defendant owed a duty to the plaintiff. Here that shouldn’t be very difficult given that Kimberly was a customer at the restaurant. She wasn’t a trespasser, but someone who was invited onto the premises meaning some duty of care is indeed owed. Second, she would need to show that the defendant reached that duty by failing in some way. Here’s the trick, Kimberly will need to show that the restaurant owner did (or didn’t do) something that a reasonable restaurant owner should’ve done if they had been in the same situation. If she can show that a reasonable restaurant owner would’ve provided safety restraints on the donkey statue, then her job, at least with regard to the second prong of the test, is done. Third, she’d need to show that the defendant’s inaction was the cause of her injury. Given the facts, it’s pretty easy to prove that her spinal fracture related to the donkey slip-and-fall and not some other intervening cause. Finally, she’d need to show that she suffered damages. Again, that’s pretty easy given the physical injuries and likely medical bills she encountered.

Now that we know what Kimberly needs to prove and where the potential trouble is (it all boils down to element #2), what else can the restaurant claim to defend itself? Beyond refuting the four things mentioned above, the restaurant likely has another defense which is to argue that Kimberly assumed the risk of her own injury by climbing onto the donkey statue. This boils down to a defendant arguing that he or she isn’t liable because the plaintiff knew that what he or she was doing was risky and thus contributed to his or her own injury. Florida has a pure comparative negligence system, meaning that if the restaurant is able to prove that the plaintiff was negligent, her recovery will be reduced by the amount of that negligence. For instance, if the Mexican restaurant shows that Kimberly was 75 percent responsible for her own slip off the donkey, then any recovery she receives would be reduced by 75%.

Though this isn’t an exhaustive analysis of the case and it’s based only on the information discussed in the news, the hope is that it offers a bit more context than the normal headline-grabbing personal injury story. Understanding what’s actually involved makes the process less abstract and hopefully gives a better sense of how the personal injury claims process actually works.

Sensory Testimony May Be New Trend In Personal Injury Cases