A storage compartment door on a Gaston County school bus opened suddenly on Wednesday, causing the school bus to overturn and injuring some 23 middle-school aged students. 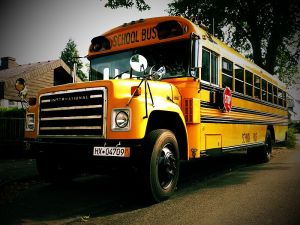 State troopers who responded to the scene told WSOC that they did not think the bus was travelling the posted 45-mile-per-hour speed limit at the time of the crash. As of Thursday, the school-bus driver had not been cited, and troopers were mum on whether any charges were expected.

A student interviewed by WSOC said “he heard a loud squeaking noise coming from the bus right before the accident happened.”

One student said the last thing he remembered was a lot of people tumbling over him.

Other common sources of claims brought as a result of injuries sustained in school bus crashes include the alleged failure of or a defect in “such components as exterior mirrors, the front service door, the location of driver controls, crossing control arms, bumpers, handrails, seat padding and window retention,” says Thomas McMahon, executive editor for School Bus Fleet.

Paul Marcela, vice president and general counsel for Blue Bird Corp., said that at one time or another “just about everything on a school bus has been the subject of a claim.”

Common targets of school-bus related lawsuits include the driver of the bus and the bus’s manufacturer. Targets may also include the manufacturers of bus components, if one or more of the components failed, leading to the accident.

In the Gaston County case, officials and—potentially—litigants and their lawyers will focus on the storage compartment door that opened while the bus was in transit. Whether the door’s sudden opening was caused by a human error associated with the proper shutting and securing of the door, or whether some defect in the door itself caused it to fly open, will likely be the focus of inquiries regarding liability for the accident.