Charlotte Injury Lawyer Matt Arnold answers the question: “How long will it take for my case to be resolved?”

The woman suing University of Oklahoma running back Joe Mixon for allegedly punching her in the face in 2014 is fighting the football player’s efforts to get the venue, or location, of the lawsuit changed to Oklahoma, where the incident occurred. 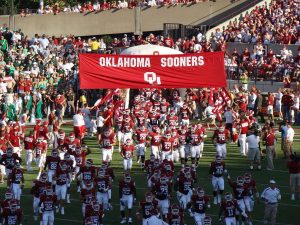 Amelia Molitor, an OU student, first filed the suit for intentional infliction of emotional distress, willful and wanton misconduct, and negligence this July in Oakley, California. She is seeking over $75,000 in damages for her specific injuries as well as punitive damages. Courts award these types of damages in limited circumstances in order to punish the wrongdoer for intentional and particularly egregious behavior.

If the allegations are true, the court—whichever one ends up hearing the case—may very well end up awarding Molitor punitive damages against Mixon. The lawsuit alleges that Mixon closed-fist-punched Molitor in the face after a disagreement in a café close to campus, fracturing bones in her face and causing serious and long-lasting physical and emotional injuries.

Mixon was criminally charged with a misdemeanor after the incident, which had numerous witnesses. He entered an Alford plea, which allows a criminal defendant to acknowledge there is enough evidence to convict but maintain their innocence. He was sentenced to 100 hours of community service, a year’s probation and cognitive behavioral counseling. After a suspension for the 2014 season, he returned to play in the Oklahoma Sooner’s 2015 season as a redshirt freshman (an academic sophomore playing their first athletic season).

So why would Molitor want her suit heard in California, where Mixon is from? The 22-year-old Texan, who is now a senior at OU, has stated that she does not believe she can get a fair and impartial jury in her school’s state because of the status and heavy importance the Oklahoma public place on OU’s football program.

It is understandably an argument worth making. Peruse any recent article about the incident and you’ll likely be informed of Mixon’s 2015 season statistics—how many yards he rushed, how many touchdowns he scored. The comment sections on stories local to Oklahoma are largely unprintable but reveal obvious bias against Molitor.

Molitor also stated in her court documents fighting the venue change that she received months of death threats from OU fans following the incident.

The issue of venue pertains to the physical location of where a suit is heard. Although venue is usually considered proper in the jurisdiction where the underlying acts of a lawsuit took place, in highly-publicized cases courts will grant a change of venue if one party shows it is unlikely enough that they will be able to receive an unbiased jury of their peers.

Convenience to both parties is also usually a consideration for venue, although Mixon’s arguments are undercut by the fact that his permanent residence is in California. Given that, and given the fact that Molitor’s witness list shows that she plans to call Mixon’s high school football coach and a California news reporter, Molitor’s attorneys clearly plan to present evidence of Mixon’s behavior back in high school in their case.

Mixon maintains that Molitor has not met her burden of proving that the potential jury pool in Oklahoma would be prejudiced against her. The California judge is set to hear arguments from both sides concerning Mixon’s request for a change in venue on October 13.

Mandatory Arbitration Clauses May Be A Thing Of The Past