Everyone has heard stories about how dangerous trampolines can be. You may know a relative or a friend or have a child who has experienced landing on one at the wrong moment and been shot off in the wrong direction. If you’re lucky, these kinds of incidents can end without harm, other times broken bones or fractures result and, in the worst cases, serious spinal or neurological damage can occur. A recent court case in New York demonstrates not only the harm that trampolines can cause, but also the importance of having good homeowner’s insurance if you happen to have a trampoline in your yard. 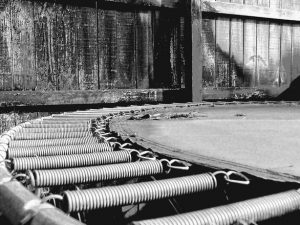 The case involves a woman from Saratoga County, NY filing suit against her brother after suffering a serious trampoline injury while visiting his house. According to the lawsuit, the woman was jumping on the trampoline with her 9-year-old nephew. The two then double-bounced, a dangerous occurrence that usually results in one of the two people flying off in an unanticipated direction. The incident resulted in serious fractures to her foot, necessitating four surgeries, including two fusions, to repair the damage.

After going through the costly and debilitating surgeries, the woman filed suit against her brother, claiming that the injury occurred due to his lack of supervision. Her personal injury claim argued that had the brother not been negligent, she woudn’t have fractured her foot. A jury ultimately came down on the sister’s side and awarded her a whopping $800,000 in damages. The woman had originally requested $1 million, arguing that her surgeries and 12 weeks off her feet deserved significant compensation. The $800,000 will be used to repay her medical bills and compensate her for the pain she suffered as a result of the injury.

Given that the number is so large, you may be wondering what will happen to the woman’s brother. Never fear, the man has homeowner’s insurance, a policy that apparently covers harm caused by trampolines. Though this bit of information was never presented to the jurors, experts say that his liability insurance will likely pay all legal bills associated with the case as well as the verdict.

Those familiar with personal injury claims related to trampolines understand just how important it is that anyone who has a trampoline on their property get good liability coverage capable of covering injury claims. Trampoline injuries are astoundingly common; according to the U.S. Consumer Product Safety Commission emergency rooms around the country treat more than 83,000 people in a given year due to trampoline-related injuries. More than other types of injuries, those involving trampolines have a real risk of being severe. Approximately one in every 200 accidents leads to permanent neurological damage.

Given these dangers, it’s essential you ensure your homeowner’s insurance covers your trampoline. Some carriers refuse to cover trampolines at all. Others will cover trampolines without asking for any further action on your part. Many carriers fall somewhere in between, allowing coverage, but requiring you to take certain steps to make the trampolines as safe as possible. These steps include things like adding netting to prevent people from falling to the ground and installing pads around the edge of the trampoline. Make sure if you buy a trampoline after purchasing your homeowner’s insurance you call and let your agent know. The last thing you want is for the carrier to deny coverage, leaving you alone holding the bag in the event something like what happened in the above case occurs.