Neighbors of a North Charlotte man who has a penchant for standing naked at his front door say they want to change North Carolina’s indecent exposure law “to protect their children.” 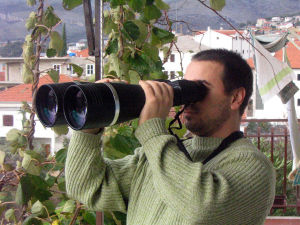 Pecolia Threatt told WBTV she was rolling her trash can out to the curb last Friday when she looked up and saw the man standing “buck naked” at his door, according to the Daily Mail.

Other neighbors of the man—who lives in Charlotte’s Cardinal Glen neighborhood—say he has been appearing at the front door of his home, in the nude, several times a week for the past ten years.

On Friday, neighbors phoned the police to report the incident, but a spokeswoman for the Charlotte-Mecklenburg Police Department said that since the man was on his own property, the matter was “not a criminal incident.”

N.C. Gen. Stat. Sec. 14-190.9 makes it a Class 2 misdemeanor for any person to “willfully expose the private parts of his or her person in any public place and in the presence of any other person or persons[.]”

Although the nude man of Cardinal Glen appears to be willfully exposing his private parts (North Carolina, incidentally, has some pretty hilarious legal precedent defining what the term “private parts” means), since he is not “in any public place,” he is not violating the law.

So the neighbors want to change the law, to what? To provide that a person may not willfully expose one’s private parts in any private place—in one’s own home? Surely not.

The proposed law, I’m guessing, would provide that persons shall not willfully expose their private parts to the public. In other words, if the public can see one’s private parts, even if one is exposing the same on one’s own property, one is in violation of the law.

This too would be fraught with problems. What if a person could only be sighted, in the nude on one’s own property, using a pair of binoculars? The person using the binoculars is in public, and sees a person’s “willfully exposed” private parts. Has the nude committed a misdemeanor?

An erstwhile concealed nude might also be sighted by revelers on a hot-air balloon trip, on a neighborhood helicopter tour, or on a plane. Assuming one is willfully exposing one’s private parts (in private, one believes, but is mistaken), is one in violation of the proposed law?

So often, it seems, we propose a law to fix a problem that involves using the machinery of the state to solve the problem for us, through law enforcement and the criminal courts.

Neighbors of the nude of Cardinal Glen already have and have had—springing from the very roots of our Common Law legal system—a potential civil cause of action and the remedies that are available in such actions.

The action is called nuisance. A private nuisance is defined as “the unlawful and unreasonable interference with the enjoyment of the property of another.”

Injunctive relief usually involves a court entering an order directing a person to stop doing something, i.e. to stop standing in the nude in one’s doorway!