The failure by the mother of a little-league softball player to allege that an area recreation district owed her a duty has led to the dismissal of her lawsuit. The judge that dismissed the lawsuit—Circuit Judge Barbara Crowder—left the door open, however, for the woman to bring the suit again. 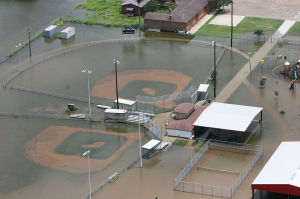 Terry L. Meyers sued the Collinsville Area Recreation District and Collinsville Extreme Club last year after she was injured on her way to the restroom at one of her daughter’s fast-pitch softball games.

The day before her injury, Meyers alleged, tournament softball games had been postponed “due to torrential downpours,” according to the Madison Record. The downpours had caused accumulations of mud and water on and around playing fields.

Meyers alleged that the area recreation district took actions to correct “defective” conditions on the playing fields and knew conditions were affected in areas where parents and spectators were expected.

Collinsville Area Recreation District moved to dismiss Meyers’ lawsuit, however, arguing that she failed to allege that the district owed her a duty. In general, in a personal injury lawsuit alleging negligence, a plaintiff must demonstrate that the defendant owed him or her a duty, then breached that duty, causing damage or injury.

In Meyers’ case, the recreation district acknowledged that it placed materials to remove accumulated water from the playing fields, in recognition of its duty to create a safe playing environment for players. The recreation district argued, however, that Meyers failed to allege “that the defendant undertook any duty to remove naturally accumulated water or mud from the area where the plaintiff fell.”

Meyers replied that since the recreation district took actions to fix the water and mud accumulations on the playing fields, it knew about the dangerous conditions that were likely to surround the playing field and failed to take corrective actions to ameliorate them. The recreation district, “armed with such knowledge,” Meyers wrote in a pleading, “failed to recognize the exact same potential and dangerous conditions for the players, patrons or any others that would be on the other direct portions of the premises and took no action at all.”

Judge Crowder disagreed, siding with the recreation district and writing that Meyers had failed to allege that the district owed her a duty and had breached it. The general rule, Judge Crowder noted, “is that a landowner does not have a duty to remove accumulations of elements like water (or snow or ice) where it is accumulated naturally.”

Judge Crowder dismissed the lawsuit without prejudice, meaning Meyers can simply fix the earlier complaint to make the proper allegations regarding duty and refile it.