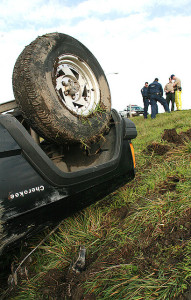 For example, if Bagley’s husband had been defrauded and a lawsuit against the fraudster settled after the husband’s death, the monies payable to the husband would be paid to the husband’s estate and distributed to his heirs.

Oftentimes when a person is killed in a car accident, a so-called “wrongful death” claim is made against the driver who caused the crash. The dead person—or decedent—obviously cannot be a Plaintiff; instead, the decedent’s estate is the Plaintiff, since the estate has the legal duty to collect all of the decedent’s assets—including monies owed by a negligent driver for causing the crash that killed the decedent.

The estate, in effect, is a person, and the estate is the person prosecuting the wrongful death lawsuit. The law considers many nonpersons to be “persons under the law.” This legal fiction applies to estates, to states, to the United States government, to corporations and other business entities, and to other legal entities that are not living organisms.

That brings us full circle back to Barbara Bagley. As the personal representative of her late husband’s estate, she has a duty to collect his assets. These assets include, potentially, monies from a wrongful death lawsuit against the driver who was responsible for her husband’s death. In Bagley’s case, that is herself.

To be clear, Bagley has not sued herself. Her late husband’s estate is suing her. Bagley happens to be the personal representative of the estate, but she is a separate and discreet person from the estate.

If the estate’s wrongful death claim is successful, then it is likely that whichever insurance company covered Bagley for negligent driving at the time of the accident will have to pay the claim to the estate. When it does, Bagley will have to distribute the funds to her late husband’s heirs.

“McNall” by Terrence McNally from Arcata California, USA – Boyd3Uploaded by Gary Dee. Licensed under CC BY 2.0 via Wikimedia Commons – http://commons.wikimedia.org/wiki/File:McNall.jpg#/media/File:McNall.jpg