Few working Americans can escape the drudgery of commuting to and from work. Fewer still avoid driving altogether, which means that when it comes to American roads, we’re stuck with each other—that means all 200-million licensed American drivers, give or take. 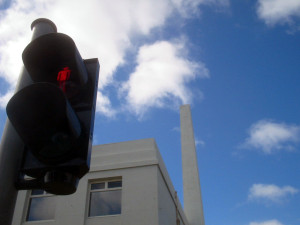 The roads aren’t always wide enough to fit us all in, and as any American driver knows, sometimes things happen on the roadways that slow us down. Sometimes other drivers do things that frustrate or enrage us. And sometimes rage and frustration lead to action.

Our brethren across the pond are not immune to this kind of action, as an incident yesterday in Scotland shows. A 20-year-old man sustained serious facial injuries after he stopped his car in front of a man in a larger car. The man in the larger car got out of his vehicle and assaulted the driver, leaving the young man “badly shaken,” according to the local detective constable.

Closer to home, a Rock Hill, South Carolina man was arrested for leaving the scene of an accident after striking a vehicle and then fleeing onto Interstate 77. The man, Nathan Pait, said the incident started when he honked at the vehicle. Pait said the man in the vehicle “acted like he had a gun,” so Pait got out of his truck and threatened the man with a machete.

In Michigan, meanwhile, 43-year-old Derek Flemming was on his way to pick up his daughter from school when he was shot to death by 69-year-old Martin Zale. Zale was the driver of a pickup truck that was swerving erratically. He passed Flemming’s vehicle, but when Flemming pulled up behind the older man’s truck at a stoplight, he got out of his car to ask whether Zale had a problem. That’s when Zale shot Flemming to death.

Zale was arrested, charged with murder and ordered held without bond. He pled not guilty, alleging that he shot Flemming in self-defense. Prosecutor Bill Vailliencourt disputed that claim, telling CBS news that Zale did not have an honest and reasonable belief that he was in imminent danger of death or great bodily harm. “You can’t just shoot somebody because you are not happy with them,” Vailliencourt said.

Aside from criminal charges, raging drivers face potential liability in civil lawsuits brought by the targets of their actions and threats. A Portland, Oregon police officer who was acquitted on criminal charges brought after a 2011 road rage incident was sued by the alleged victims in that incident. The victims—a husband and wife from Idaho—sought $255,000 in damages from the officer, who they said tailgated them before pointing a loaded gun at them.

The couple ultimately dropped their lawsuit, but the officer’s employment was terminated after an investigation by the Portland Police Review Board.