A sex-discrimination lawsuit brought by a schoolteacher at an elementary school associated with the Roman Catholic Diocese of Fort Wayne-South Bend, Indiana will proceed to trial after United States District Court Judge Robert L. Miller, Jr. denied the diocese’s motion for summary judgment. 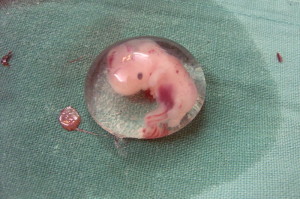 The teacher, Emily Herx, sued the diocese in 2012 after she was terminated from her teaching position at St. Vincent de Paul School. Herx’s firing came after diocese officials discovered Herx underwent a procedure for in vitro fertilization. In-vitro fertilization is a process in which a man’s sperm and a woman’s egg are joined outside the womb, normally in a petri dish. After the egg and sperm are successfully joined, the resulting embryo is placed into the woman’s womb.

Herx underwent in-vitro fertilization because she suffers from infertility. She argued in her lawsuit that infertility is a protected disability under the Americans with Disabilities Act (“ADA”) and that her termination violated both the ADA and the Civil Rights Act of 1964.

The Roman Catholic Church disapproves of in-vitro fertilization because additional embryos are created to increase the odds of a successful pregnancy. When an embryo is successfully placed in a mother’s womb, the additional embryos are destroyed. The Church believes that human life begins at the moment of conception, or when the sperm and egg join, so the destruction of embryos constitutes the willful destruction of human life.

Herx alleged that then-Monsignor John Kuzmich called her a “grave, immoral sinner” when she asked for time off in 2011 in order to undergo a second round of in-vitro fertilization treatments. Kuzmich said that if news of Herx’s in-vitro treatments got out, it would cause a great scandal for the church, Herx alleged. When she assured Bishop Kevin Rhodes that no embryos were destroyed in her treatment, Herx alleged that Bishop Rhodes called in-vitro fertilization “an intrinsic evil” that was not justified in any circumstances.”

Judge Miller denied Herx’s claim that she was terminated because of her infertility. Instead, he wrote, “all of the evidence in the record indicates that the Diocese acted because of Mrs. Herx’s choice of fertility treatment[.]” The Diocese argued that it was protected from Herx’s claims because both the ADA and the Civil Rights Act contain exemptions for religious employers. Herx’s lawyers argued that the Civil Rights Act protects “the rights of women to have children through all methods[.]” They also pointed out that male staffers at the school who were caught out at a strip club were punished more lightly than Herx.

In his order, Judge Miller wrote that the question for trial was “whether Mrs. Herx was non-renewed because of her sex, or because of a sincere belief (by the diocese) about the morality of in-vitro fertilization.”