Strange things were afoot at the Circle K store in Phoenix, Arizona where Jeremy Willey worked. He thought he was having one of the worst days of his life on May 24 when a masked robber entered the store, tied Willey up and administered a brutal pistol whipping. 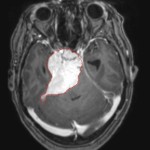 Willey’s cuts required stitches; to be on the safe side, doctors took X-rays of his skull. The X-rays showed the robber hadn’t inflicted any serious damage, but doctors discovered something far worse: a massive tumor growing in Willey’s brain. Willey had been asymptomatic and likely would have remained so, doctors said. The tumor would have progressed to the point at which Willey would have gone to sleep one night and would not have woken up again. Doctors said they caught the slow-growing tumor just in time.

The tumor is benign—meaning its cells will not spread to other parts of Willey’s body—but it may take as many as three surgeries to fully remove it due to its size. Willey has undergone one of the surgeries already. The first surgery has left Willey partially paralyzed.

Willey’s wife, Alisha, said it was difficult to feel thankful towards someone who had violently attacked her husband. Security footage captured images of the robber. The images showed the man striking Willey across the back of his head with a gun. The robber has not been caught.

This is not the first time apparent misfortune has saved a person’s life by revealing a previously unknown medical condition. While on vacation with her son in 2013, 42-year-old Karen Cooper was struck by a ball in the chest while playing a game. She became worried after noticing tenderness around the injury site and saw a doctor. She was diagnosed with stage-three breast cancer. Had she not been hit by the ball, doctors told her, she may not have discovered the cancer in time.

In 2010, a 9-year-old boy broke his leg while playing in a little league baseball game. While examining the injury, doctors found a cyst growing near the fracture site. Had the boy not broken his leg, the cyst would likely not have been discovered. Doctors said allowing the cyst to grow unchecked could have caused the boy significant future problems.

Common sports injuries can sometimes mask more serious underlying conditions. The National Center for Biotechnology Information recommends, for instance, that when conservative trial care fails to resolve suspected soft tissue injuries within a month, further tests may be warranted to rule out a pathological—or disease-related—conditions.

Sometimes—as in the case of Mr. Willey—just plain good luck disguised as bad luck is the only thing that saves the day.

If you think someone needs to save your day, or if you or someone you know has been injured as a result of someone’s negligent or intentional conduct, please do not hesitate to contact me to set up an appointment today. If you or someone you know has any questions regarding potential personal injury claims, feel free to contact the experienced personal injury attorneys at Arnold & Smith, PLLC in Charlotte, North Carolina for a free consultation. Call toll free at (955) 370-2828 or click here for additional resources.