Images of a man being subdued by at least five New York City police officers flashed across media outlets around the world last week after the man—a 43-year-old father of six—died in custody. 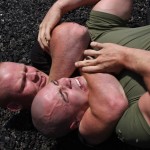 The man—Eric Garner—was placed in a chokehold by Officer Daniel Pantaleo before other officers joined in to take Garner down. Sgt. Kizzy Adonis said she believed she heard Garner trying to notify officers that he was having difficulty breathing after being taken down.

Officers first approached Garner because they alleged he was selling untaxed cigarettes. After approaching him, they said, he resisted arrest and failed to obey instructions as police tried to handcuff him. After Garner became unresponsive, a witness could be heard on video of the incident asking officers why no one was performing CPR. An officer answered that Garner was breathing, so he didn’t need CPR.

An initial investigation into Garner’s death did not mention Pantaleo’s chokehold, claimed Garner was not in “great distress,” and said he did not “get worse” while being held down by officers. Video footage of the skirmish, however, appears to show Garner struggling on the pavement and repeatedly saying “I can’t breathe” before losing consciousness.

In the meantime, Bratton has ordered retraining for all of the city’s 35,000 police officers in appropriate use of force. Pantaleo—the officer who administered the chokehold—has been placed on desk duty while the department investigates the case. The New York City Medical Examiner’s Office has not yet determined whether the chokehold caused Garner’s death.

This is not the first time Pantaleo has made headlines for aggressive conduct. According to the Daily Mail, as many has seven civil rights lawsuits have been brought against the officer. The city paid $30,000 to two men who alleged that they were illegally arrested and strip searched by Pantaleo. Another lawsuit was still pending at the time of Garner’s death. Garner’s family, meanwhile, has demanded that the department bring criminal charges against Pantaleo.

Four emergency medical technicians who responded to the scene have also been suspended. They have been accused by witnesses to the incident of failing to render appropriate aid to Garner.

Not everyone is in Garner’s corner. As reported by USA Today, posters on two sites frequented by law enforcement officers took up for Pantaleo, calling Garner a “walking heart attack” due to his weight and saying if Pantaleo had administered a deadly chokehold, Garner wouldn’t have been able to tell officers he couldn’t breathe. Sadly, posts on those sites devolved into name-calling and worse.