In yet another twist in the ongoing saga of the dangerous Vortex rides at the North Carolina State Fair, police say they have now arrested the owner of one such ride. Authorities say that Joshua Gene Macaroni surrendered to police late last week on three felony assault charges related to the accident that left five riders seriously injured. 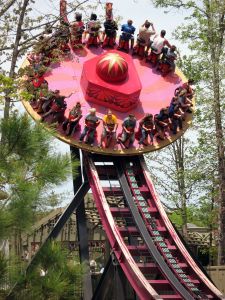 Officials with the Wake County Sheriff’s Office say that Macaroni, a 32-year-old from Georgia, turned himself in to face charges related to the October 24th accident involving the Vortex amusement park ride. Investigators say that as riders were just starting to get off, the ride jolted back to life and ended up dropping five people from heights of up to 30 feet.

Investigators have so far not released word on why they believe Macaroni might be involved in the accident, though they have said that his name is listed as the owner of the Vortex ride at issue. For his part, Macaroni’s attorney has said that he is puzzled about why Macaroni would be charged and says that his client intends to plead not guilty. Macaroni is currently free on $225,000 bond.

The recent arrest marks the second since the accident occurred a few weeks ago. The ride’s operator, an independent contractor named Timothy Tutterrow also from Georgia, was arrested several days after the incident and has also been charged with three counts of assault with a deadly weapon.

Police say they have reason to believe the ride’s safety features were tampered with. Investigators say the ride was altered to bypass critical safety equipment that was supposed to keep it from moving unless the riders were secured. The alleged tampering occurred after a malfunction with a safety switch shut the ride down for hours a few day before the opening of the fair.

Three people remain hospitalized at WakeMed in Raleigh, including a 14-year-old. Two other people were treated and released after suffering from more minor injuries. The injuries demonstrate just how dangerous amusement park rides can be to the unsuspecting public. Though the five riders injured in this case went to the North Carolina State Fair in search of fun, they ended up leaving with serious injuries that required long-term hospitalization.