Most people have heard about the recent blockbuster verdict in the Erin Andrews case. Andrews was awarded $55 million after jurors sided with her after a private and illegally obtained video of Andrews made its way around the internet. Since first being posted, the clips have been viewed some 16 million times. 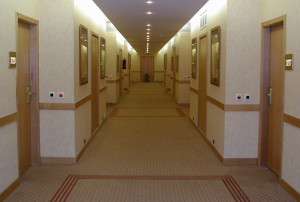 Though most people were aware of the massive, multimillion-dollar verdict, few understand how and why the damages were allocated. You might think the full amount was owed by Michael Barrett, the man who actually recorded the video and then distributed it online for others to watch. Though Barrett was a defendant in the case, he wasn’t the only one. The other defendant was the Nashville Marriott.

At this point it might be helpful to offer a few details about the incident. Back in 2008, Andrews was staying at the Nashville Marriott for work. While there, Michael Barrett, someone with an alarming interest in the ESPN sportscaster, was able to confirm with the Marriott that Andrews was staying at the hotel. Barrett then reserved an adjoining room and proceeded to alter the peephole in the door that linked their two rooms. By altering the peephole, Barrett was able to set up a camera to look into Andrews’ room, recording her private moments, including those as she got into or out of the shower.

After the video surfaced, Andrews filed suit against Barrett and the Marriott. Andrews argued Barrett was responsible for actually performing the illegal acts (for which he was eventually arrested, charged, convicted and sentenced to jail). With regard to the Marriott, Andrews argued it was liable due to breaching the duty of care it owed to guests like Andrews.

In Tennessee, where the trial occurred, the law says that hotels (or any business) owes a duty of care to its guest. This duty of care requires the hotel to act reasonably and to do what it can to protect its guests from harm. The duty of care also included a duty to warn people or attempt to protect them from foreseeable harm from other guests.

Will Erin Andrews See a Peep of her Personal Injury Damages from Stalking Case?