In this post-holiday season, many people may now be dealing with the impact of the Christmas gift-giving binge. For some, that’s tackling enormous credit card bills, for others, it may be recovering from hoverboard-related injuries. The new tech toys were the hottest item this year, with kids and adults clamoring for the personal transportation items. Though they may be fun, they’ve also proven to be quite difficult to operate safely, opening up a new avenue for personal injury claims. To find out more, keep reading. 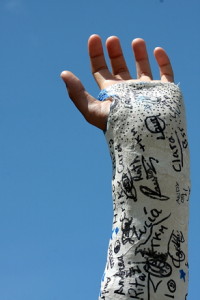 Hoverboards are the general category that covers a multitude of specific products. These boards have two wheels and a board to place your feet on. Operators step on the device and can direct their movement by leaning forward or backward. They’re fun and a can be a source of great amusement. Sadly, they can also be a source of great pain.

Since becoming the focus of media attention, the hoverboards have begun collecting bad press as well. It’s been reported that hoverboards have been randomly and without warning bursting into flames. The fires have occurred at many different times, some while the boards are charging and others while in use.

Another, and likely much larger problem, has to do with injuries to operators. The devices can lurch forward unexpectedly and are often more sensitive than people imagine. Though they are treated as toys, they can move quickly and cause tremendous damage, sending riders tumbling onto hard pavement, other people or objects, in turn leading to cuts, bruises and broken bones.

According to news reports, lawsuits have already been filed by owners of the hoverboards, including at least two different class-action lawsuits. In one case out of New York, a man filed suit claiming that the hoverboard he purchased, a Swagway, was defective after it caught fire while it was charging. In another case out of Alabama, a couple is suing a local retailer after one of the devices caught fire at their home.

Another problem for hoverboard manufacturers is that government regulators may soon be closing in on those companies responsible for putting out shoddy pieces of equipment. The Consumer Product Safety Commission has revealed that it is currently investigating nearly two-dozen complaints re: hoverboard fires. The CPSC says it is busy testing the products in its labs, but hasn’t yet issued any broad warnings. That hasn’t stopped the airline industry, with Delta leading the charge in banning the products from its planes after the reports of sudden fires began to increase.

One concern injured owners may have is that the vast majority of hoverboard manufacturers are located overseas, specifically, in China. Though it is true that this can complicate filing lawsuits, it absolutely does not prevent these claims for faulty or defective products from moving forward. Overseas companies still have financial assets located in the U.S. that can be seized in the event of a successful civil claim. Additionally, retailers can also be sued if they are found responsible for harm caused by the products they market to unsuspecting consumers.

One point that’s important to note about those considering such a claim is that a valid lawsuit cannot be filed based purely on clumsiness. The fact that someone trips or falls is not usually sufficient justification for a personal injury lawsuit. Instead, it will need to be demonstrated that the product is either misleadingly labeled or is instead defective and that these issues led to the harm suffered by the consumer.

Mayor Declares State Of Emergency Due To Lead Poisoning Fears