Charlotte Personal Injury Attorney Legal Briefs: What can you sue for in a personal injury case? 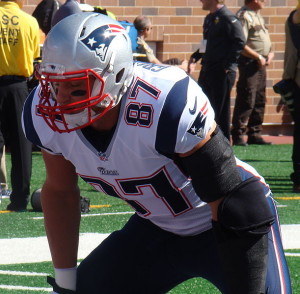 The book bills itself as the first “in the Rob Gronkowski Erotica Series.”

Rob Gronkowski, if you do not know, is a 25-year-old wide receiver for the National Football League’s New England Patriots. The six-and-a-half-feet-tall, 265-pound star caught six passes in the Patriots’ Super Bowl win last season, including 22-yard touchdown pass from quarterback Tom Brady.

Since the close of the football season, Gronkowski has appeared on numerous television shows and is pushing a line of products, including the erotica series featuring his likeness. He appears to be spending his time in a more wholesome manner than former teammate Aaron Hernandez. Gronkowski and Hernandez were both drafted as wide receivers by the Patriots in 2010.

In 2012, Hernandez told ESPN that he and Gronkowski had a lot in common. “We found out we both like to have fun and were a little bit immature,” Hernandez told the sports-news network. Six months later, prosecutors allege, Hernandez murdered two men in a drive-by shooting outside a Boston nightclub. The ex-player was convicted of a separate 2013 murder two weeks ago.

Gronkowski’s off-the-field actions appear to be far more lighthearted. The star has burnished his image as a free-wheeling party animal and goofball, appearing in stints on shows like Jimmie Kimmel Live and SportsNation… and appearing in erotica.

A Gronking to Remember tells the story of “the normally sheepish Leigh,” who wanders into the television room one afternoon and finds her husband “Dan” and friends watching football. Leigh sees Gronkowski score a touchdown and then perform his patented “Gronk Spike,” described as a “notorious monster smashing” of the football.

Witnessing the “Gronk Spike,” of course, “jettisoned jiggling ribbons of electric jelly through” Leigh’s body, and melted her “knees like two pads of margarine.” The book goes on to chronicle Leigh’s lustful dreams about Gronkowski and, well… Gronking.

That led to untold amounts of ridicule and shame from people who recognized them, they allege in a lawsuit pending in federal court against the book’s author and companies that have sold and distributed the book online.

While the couple acknowledge that they may have uploaded the photo online, they allege that it “was appropriated by the [A Gronking to Remember] Defendants for commercial gain without the permission of the Plaintiffs.”

At least one online retailer, Amazon.com, has argued that since the book was technically self-published, it had no control over the content and cannot be held liable for the actions of independent third parties. It has also argued that the couple assumed the risk of others using their photo by sharing it online.