Legal Briefs: Do I have to sign a release allowing the insurance company to get my medical records?

A man exposed to a substance used in food flavorings to mimic the taste of butter has been awarded $2.6 million by an Orange County, California jury. 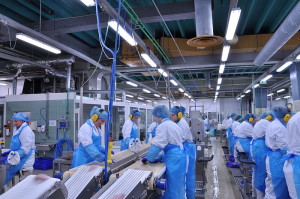 The man, Tanu Vatuvei, contracted bronchiolitis obliterans after exposure to diacetyl, a substance that is a natural byproduct of the fermentation process but which can also be chemically synthesized by manufacturers. Diacetyl has long been used by food-processors to mimic the taste and texture of butter, notably in microwaveable popcorn and in other snack foods.

Writing for the Legal Examiner, Jacob Plattenberger explains that food-processing chemicals like diacetyl can be volatile. When they are heated and evaporate, they can easily be inhaled. Powdered forms of the chemicals can also be inhaled through dust created during the food-production process.

Plattenberger cites a study from the Centers for Disease Control showing that workers in a plant in the Netherlands who helped manufacture diacetyl suffered from the same types of lung ailments as workers in plants that produce microwaveable popcorn. Plattenberger expects to see more workplace-diacetyl exposure cases.

Vatuvei worked for nearly ten years at Mission Flavors & Fragrances, Inc., a manufacturing plant outside Los Angeles, California. He alleged that exposure to diacetyl left him with just forty-percent lung capacity. Doctors have said he will eventually need a lung transplant.

While a California jury was swayed by Vatuvei’s diacetyl-exposure claim—awarding him $2.6 million in damages—diacetyl exposure claims outside of the workplace have not met with as much success.

In 2014, a federal jury cleared International Flavors of any wrongdoing. The Stults’s appeal of that decision is pending.

Wayne and Mary Watson won in 2012 the only known successful “popcorn lung” lawsuit brought by consumers against food makers. Their $7.2-million jury award was later reduced on appeal, and they ultimately settled with Illinois-based Gilster-Mary Lee Corp. while further appeals were pending.

Workers in the food-production industry have litigated successful “popcorn lung” claims against food manufacturers for over a decade. In 2004, a jury awarded a 32-year-old worker from a Missouri-based Gilster-Mary Lee plant $20 million after he developed lung ailments as a result of workplace diacetyl exposure.

As a board-certified Family Law Specialist, Mr. Arnold’s professional practice focuses on Family Law actions such as divorce and child custody, although his practice encompasses a wide range of civil practice areas.

Mr. Arnold is a member of the North Carolina State and Mecklenburg County Bars, and is admitted to practice in all state courts in North Carolina, in Federal District Court for the Western District of North Carolina, and in the Fourth Circuit United States Court of Appeals in Richmond, Virginia.