Six lawsuits were just filed by former college football players against their universities, conferences, and the National Collegiate Athletic Association, claiming negligence over the handling of the players’ head injuries. The named defendants in the filings include Vanderbilt and Penn State and three major football conferences: the Southeastern Conference, the Big Ten, and the Pacific-12. 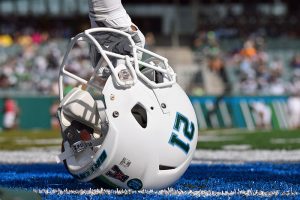 Earlier this year, a federal judge approved a settlement in a separate class-action lawsuit on behalf of all college athletes against the N.C.A.A. The proposed settlement included new safety protocols but did not offer any payments to individual players struggling with cognitive brain function issues following football-related concussions.

In contrast, the N.F.L.’s settlement with retired players last year included hundreds of millions of dollars to help retired players with any of several neurological diseases. It provided for payments of up to $5 million to affected players, medical monitoring for all N.F.L. players to determine whether they qualify for payment, with an additional $10 million set aside for education about concussions.

The new N.C.A.A. lawsuits also name Auburn, Georgian, Utah and Oregon as defendant universities. The plaintiffs involved had careers spanning the decades before the N.C.A.A. started requiring concussion protocols from its members; one of the plaintiffs competed as far back as the 1970s. The lawsuits state that the players suffered concussions in college and now have a variety of health problems, including depression, mood swings and sleeplessness.

The new suits face hurdles. Concussed former college athletes first sued the N.C.A.A. over concussions in 2011. After numerous similar cases were brought around the country, they were consolidated into the class-action case.

In 2014, the N.C.A.A. announced that they had reached a settlement with the plaintiffs’ attorneys. The judge approved most of the terms, including a $70 million fund to screen for brain trauma, but notably refused to sign off on the provision that would have given the N.C.A.A. full immunity from class-action lawsuits in the future. The judge’s counter-proposal to the settlement agreement specifically allowed for athletes from one university to sue the organization as a class. As of now, the N.C.A.A. still has yet to agree to this proposal.

This back-and-forth well demonstrates the process of negotiating a settlement instead of going to trial—both defendant and plaintiff must find terms they agree on, and present them to the judge in a cohesive agreement. This agreement is presented to the judge, who can approve the agreement in whole or in part. If they see fit, the judge can make a recommendation as to any new or changed terms for the agreement, as happened here. Then, both parties must agree to these changes.

Each of the six cases filed seeks its own jury trial to award damages to the players individually. Some legal experts have pointed out that it might be much easier to prove negligence against the N.F.L., an organization dedicated specifically to professional football, than against universities, who have broader and more diverse goals.

The importance of duty of care in personal injury negligence lawsuits