The danger of using cellphones behind the wheel is evident to everyone by now. For years, we’ve all heard about accidents caused by distraction linked to cellphones used for talking, texting or surfing the internet. Despite the endless warnings, some have refused to take heed and alter their behavior. A recent settlement involving a North Carolina company whose truck driver crashed into an unsuspecting motorist might spur actual changes in an industry that has been slow to take such steps. To find out more, keep reading. 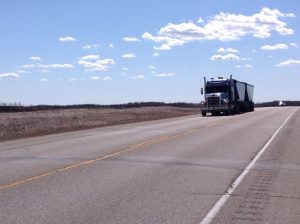 The settlement in question was announced last week after a South Carolina couple filed a personal injury lawsuit against Unifi Inc. The company manufacturers polyester and nylon fabrics and operates a fleet of more than 60 tractor-trailers in the region. One of the drivers of these trucks was involved a serious accident, colliding into the back of a couple who were attempting to turn into their driveway.

At the time of the accident, the company denied that the trucker was at all responsible for the crash. Initially, the argument was that the trucker had not been using his phone prior to the accident and that the couple was at fault for abruptly stopping without using headlights at dusk. Fortunately, skilled accident reconstruction occurred. Investigators looked at the black box in the vehicle, which showed that the headlights were on at the time of the crash and that no abrupt stop had occurred. Instead, the vehicle had simply slowed down to about 10 miles per hour in preparation for the turn when the tractor-trailer smashed into them from behind.

Additionally, cellphone records showed that the driver of the truck was using the phone at the time of the accident. In fact, his cellphone had been connected for seven hours during the course of his 8.5-hour shift that day.

To limit liability, Unifi also argued that it had a clear policy in place stating that drivers could not use their phones for any period longer than two minutes and, even then, only if they were connected using a Bluetooth device. Again, investigators discovered that while Unifi may have had such a policy in theory, in practice, it was never enforced. Drivers were only asked to sign a statement once a year promising not to use their phones for longer than two minutes at a time. The company never checked up on this, never performing any spot checks or looking through call logs. This despite evidence that many drivers used the phone as frequently as the driver at issue in this case.

Given the facts of this case, it isn’t surprising that Unifi agreed to settle the dispute, ultimately promising to pay the injured couple $3.75 million to compensate for the harm they’ve suffered. More than this, the company has said that it will now ban its drivers from using telephones while their trucks are on the road. Unifi now follows in the footsteps of other companies who have banned drivers from talking while driving. Those companies most serious about tackling the problem take steps such as installing cameras in truck cabins to ensure that drivers are following the rules at all times. After all, it only takes one moment of distraction to lead to a serious, and potentially deadly, accident.