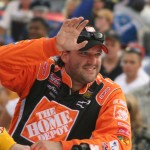 This was exactly the sentiment many car racing fans felt this weekend as they came to terms with the sport’s latest on-track fatality. It was, to be sure, a preventable death. During a race on a dirt track in Canadaigua, New York, something caused 20-year-old racer Kevin Ward’s racecar to spinout. Early reports suggested racer Tony Stewart’s car bumped Ward’s car, causing the spinout; subsequent reports and a review of video of the incident make that conclusion unclear.

What is clear is that after his car spun out, Ward climbed out of his vehicle and walked onto the raceway, appearing to gesture at oncoming racecars, including Stewart’s. In a scene straight out of a horror show, Stewart’s car appeared to collide with Ward, either running him over or sucking him under the car. Ward was then seen lying motionless on the track. The race was immediately called, and emergency technicians could be seen tending to Ward within seconds of the collision, but it was too late. Ward died of his injuries.

The Ontario County Sheriff’s Office continues to investigate the incident. Investigators said a “visibly shaken” Stewart was questioned twice after the incident and fully cooperated with authorities. Sheriff Philip Povero told reporters on Sunday that investigators had no information showing criminal intent, although charges had not yet been ruled out.

The criminal investigation is ongoing, and questions continue to swirl around Stewart’s actions in the (split) seconds before his car struck Ward. Did he intend to strike Ward with his car? Did he try to spin his wheels and “buzz” Ward, or turn slightly towards Ward in order to “just miss” him, in order to send him a message? The only person who can answer those questions is Stewart, and as one local commentator put it, nothing drives the truth into the shadows quicker than the threat of a lawsuit.

The untimely death of a 20-year-old rising star on the racing circuit is sure to produce a wrongful death lawsuit or, at least, a settlement in lieu of a lawsuit. No one is lucky and no one is fortunate when a loved one is killed as a result of someone else’s negligent or intentional conduct, but where the death occurred matters.

If Ward’s death had occurred at Bruton Smith’s dirt track at Charlotte Motor Speedway, Ward’s family would probably not have a claim to make. That is because North Carolina is one of the few states that still applies the concept of strict contributory negligence in personal injury cases. Under that theory, if someone killed in an accident was partly to blame—to any extent—that person’s case must be dismissed. It is a fact that Kevin Ward Jr. walked onto a dirt track where he knew racecars were racing. That fact would almost certainly mean a wrongful death action brought on his behalf in North Carolina would be dismissed.