Allison Kinsman was an 18-year-old freshman at Florida State University in Tallahassee, Florida, on the night in December 2012 on which she says she ran into a man at a Potbelly Sandwich Shop. 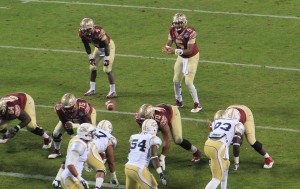 In a documentary film titled The Hunting Ground, Klinsman alleged that the man “creepily” followed her around throughout the night after meeting her, and only stopped when another man—a friend of Klinsman’s—pretended to be her boyfriend.

Klinsman alleges that the man bought her a shot. After consuming the shot, Klinsman says she began to feel dizzy and vaguely recalls riding in a taxi to an apartment. When she awoke again, she claims, a man was raping her. She asked the man to stop, but he ignored her. She claims that the man’s roommate also implored him to stop, but the man ignored him and instead moved Klinsman to a bathroom, where he raped her again. Afterwards, Klinsman says, the man drove her on his scooter to a location she recognized and let her go.

Klinsman reported the incident to police the following day, according to the New York Times, but could not identify her attacker nor identify where he lived. A month later, however, Klinsman recognized the man in a class and heard a professor call his name.

The man, she said, was Jameis Winston—Florida State’s all-star quarterback who led the Seminoles to a National Championship in 2014 and who is expected to be the first pick in this year’s National Football League draft.

After Winston was identified, police investigated the incident further. Prosecutors interviewed Klinsman, and ESPN reported that DNA in her underwear matched Winston’s. Winston’s attorney said that the two had consensual sex. Ultimately the State of Florida declined to charge Winston with a crime, and Klinsman withdrew from the university. Winston was cleared of violating any university policies after a two-day student-conduct hearing in 2014.

Now Klinsman has brought a civil lawsuit against Winston, alleging that he raped, assaulted and falsely imprisoned her and inflicted emotional distress upon her.

Legal experts told the Daily Mail that Klinsman’s civil action against Winston was subject to a lower burden of proof than the State of Florida’s countenanced criminal action. Former federal prosecutor David S. Weinstein said Klinsman merely has to tip the scales in her favor on her claims, instead of proving Winston’s guilt beyond a reasonable doubt—the standard in criminal cases.

Klinsman has said she hopes the lawsuit will encourage other victims of rape and sexual assault to come forward.

Winston has denied any wrongdoing.