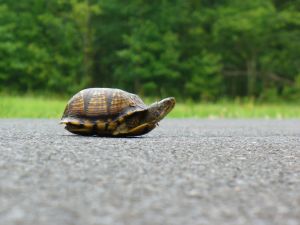 According to an article in the Miami Herald, most injuries on the road involving animal crashes occur not when a driver actually hits the animal, but instead when the car crashes following an attempt to avoid hitting the animal. Apparently it’s the swerving away from the critter that actually causes most of the injuries to drivers and their passengers.

According to the National Highway Traffic Safety Administration (NHTSA), there were 173 fatal accidents involving animals in 2009, the most recent year that statistics were available. That same year there were 12,000 car accidents that resulted in injuries involving animals. Even more shocking is the news that according to the Insurance Industry for Highway Safety, 1.5 million accidents involving deer occur each year across the country and result in $1 billion in damages.

According to people familiar with the subject, highway safety experts and police officers who encounter such accidents regularly, swerving to avoid a collisions may actually be more dangerous than simply hitting the animal. Law enforcement officials urge motorists to avoid sudden evasive maneuvers if you’re not able to check the other lanes of traffic beforehand. If it’s safe to make a lane change then the experts say to go ahead, but if you’re not sure what else is going on around you then swerving is usually the wrong choice.