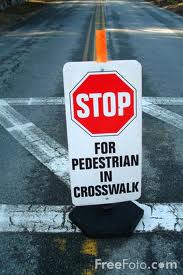 Yet again there has been a pedestrian hit by a car and inadequate crosswalks may be to blame. On Monday, April 16, 2012, 13-year-old Jessi Mendoza-Valdez had an unfortunate encounter with a car as he was crossing the street and two days later he died from his injuries. He was trying to cross a busy intersection during rush hour traffic.

Valdez and his parents lived at the Misty Woods Apartment complex. On Monday afternoon, he was trying to cross the Central Avenue from the side of the street where his apartment complex was located to the other side where a small group of stores was located. He successfully made it to the middle of the road onto the median, but when he was trying to make it across the rest of the way he was hit by a car.

The driver of the vehicle immediately stopped to help Valdez and remained on the scene while the police began their investigation. He has been cooperating with the police the investigation. An eyewitness to the accident, Anival Sandoval, had just made it into the store when the accident occurred. Wednesday, Sandoval noted that the same intersection where Valdez was hit has posed a danger in the past because of the lack of crosswalks there.

As we discussed only a few weeks ago in the post Dangerous Crosswalk a Source of Concern to Charlotte Parents, these pedestrian accidents might have been prevented had the city of Charlotte decided to place a crosswalk in that area. If more cases such as this continue to occur, there may be grounds to file a complaint against the city for failing to exercise due care in the protection of its pedestrians. Such a case might prompt the city to investigate whether there is a need to increase the number of crosswalks in the city. If you or someone you know has a question about a personal injury of any kind, please contact the personal injury attorneys in Charlotte, North Carolina at Arnold & Smith, PLLC. They will provide you with competent representation and work to get you the recovery that you deserve. Call today for a free consultation at 704-370-2828.