The online dating world took a collective gasp as one of its leading lights, Tinder Chief-Marketing-Officer Justin Mateen, was accused of sexual harassment and discrimination. The company says it has suspended the cofounder. 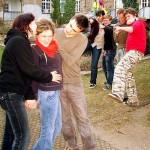 Tinder compiles information from users’ Facebook accounts and, based on a set of criteria, tries to connect potential mates.

In the sex harassment lawsuit, brought by former Tinder Vice-President of Marketing Whitney Wolfe, Mateen is accused of connecting with Wolfe inappropriately both online and the old-fashioned way. Wolfe alleges Mateen pursued her romantically, and the two began “officially dating” in February of 2013.

It didn’t take long, however, before Mateen became verbally controlling and abusive. He told Wolfe if she hurt his pride by dating another man, he’d fire her. A few months after breaking off their relationship, Mateen called Wolfe a “whore” at a company event. He also went behind Wolfe’s back, describing her as a “gold digger” and a “liberal lying slut” to coworkers. Wolfe claims pressure from Mateen led to her termination.

Closer to home, Whitney Nicole Shaffer, who worked as an Assistant Prosecutor for three months in 2013, alleges during that time that her boss, Jay Gaither, “pestered her to go out on dates, sent her racy text messages, and groped her.”

Gaither is the District Attorney for N.C. Judicial District 25, which covers Burke, Caldwell and Catawba counties.

Shaffer alleges Gaither rubbed her thigh during a car ride and said he loved the feel of her body. Shaffer also alleges Gaither drank while driving and said he could use his position to “do legal favors for friends.” Gaither denied the “slanderous” allegations and said Shafer levelled them after being terminated.

Shaffer’s attorney told the Charlotte Observer she resigned in fear of Gaither, who told her he had been a wrestler in high school.

The lawsuits underscore, perhaps, that some all-too-common kinds of workplace harassment may continue to plague industries far and wide – from the free-wheeling twenty-something hipsters running an internet startup to a self-described conservative father-of-four running a prosecutor’s office in the buckle of the Bible belt.

Call me today for an appointment, and we can talk about your options.