A terrible workplace accident at a construction site in Marion, North Carolina led to serious injuries to more than a dozen people and required help from nearly 70 rescuers. Police say scaffolding located at the site of the construction of a new wing of McDowell High School collapsed late last week while 15 workers were working on top of it. 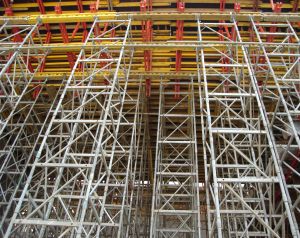 Authorities say that as the scaffolding collapsed, seven of the 15 workers jumped onto and straddled the wall that was under construction while the rest fell between 40 and 50 feet into the pile of broken metal scaffolding beneath them. According to police, one man dangled from the scaffold for nearly an hour before emergency responders were able to rescue him.

Given the number of workers present and the severity of the injuries, more than 70 people were called to the accident scene to rescue construction workers. Several workers had to be life-flighted to hospitals in Spartanburg and Asheville given the critical nature of their injuries.

Police say the workers were all employed by a local company named Beam Construction. Investigators say they are working hard to determine the cause of the scaffolding collapse and want to ensure that such an accident does not happen again.

For all the talk of safety efforts for construction workers, the industry is consistently one of the leading sources of workplace accidents and deaths. Construction work is notoriously dangerous even with stringent government safety regulations in place. The simple nature of the work exposes employees to risky conditions, dangerous equipment, potentially hazardous materials and unstable work areas.

One of the biggest sources of danger (and typically one of the most preventable) in the industry comes from workplace falls. The Bureau of Labor Statistics recently conducted a one-year study of fatal workplace injuries and the study found that 36.1% of all construction accidents were due to falls. One of the major causes of such falls is scaffolding collapse. According to the Occupational Safety and Health Administration (OSHA), approximately 65 percent of workers in the construction industry frequently work on scaffolds. Falls occur most often because scaffolds were improperly assembled or were put together using defective parts. Collapsed scaffolding causes great harm to workers, as this recent North Carolina case demonstrates, because workers drop from dangerous heights and have nothing to cushion their fall.

“8 injured in scaffolding collapse at high school,” by Dianne Gallagher, published at WCNC.com.