Dr. J.B. Perdue says “ambulance-chasing lawyers” are to blame for the first known settlement of a lawsuit ever made by North Carolina’s medical examiner system. 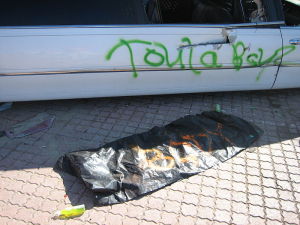 The lawsuit was filed after Dr. Perdue declared a living man dead.

Larry Green was found by emergency responders lying face down beside a road in Franklin County, North Carolina on January 24, 2005. Green had a noticeable head wound, and one paramedic could find no vital signs.

Dr. Perdue was summoned to the scene. After examining Green, Perdue ordered the man to be placed in a body bag and transported to a morgue. A paramedic suggested to Dr. Perdue that Green might be breathing, however Dr. Perdue dismissed this by saying that left-over air was merely escaping Green’s body.

According to court documents, some eight witnesses saw Green’s chest and abdomen move while on the scene. In addition, as Green was placed into the body bag, witnesses saw his right eyelid twitching. Dr. Perdue attributed this to a muscle spasm, saying it was “like a frog leg jumping in a frying pan.”

Luckily for Green, later on in the evening a North Carolina Highway Patrol trooper needed additional information about circumstances of Green’s death. When Dr. Perdue removed Green’s body from a morgue refrigerator drawer, he realized the man was still alive.

Green is now 39 and living in a nursing home. He is unable to walk or talk.

Green’s family settled claims against Franklin County, the local Emergency Medical Service and two paramedics in 2009 for $1 million. In the meantime, the family filed a claim against the Department of Health and Human Services in 2008. That Department is responsible for the work of medical examiners. By the time the family filed its claim, the cost of Green’s day-to-day care had exceeded $650,000.

Green’s family contended that Dr. Perdue was negligent in his handling of the investigation into Green’s injuries and the false “dead” declaration. Charlotte attorney Bob Bollinger told WBTV he was surprised the settlement was not larger, suggesting that the State may have contended that the severity of Green’s injuries were caused by his being struck by a car, as opposed to any negligence on the part of Dr. Perdue.

“It seems like the state got off easy,” Bollinger told WBTV.

Medical examiners are often called to the scene of suspicious or violent deaths. Their reports are used by investigators to assist in solving crimes. The Charlotte Observer reported last year that many of North Carolina’s 350 medical examiners do not follow recommended practices. In many cases, they do not even visit the scene at which an individual perished and in some cases do not even view bodies.

Asked whether he felt any guilt for what happened to Mr. Green, Dr. Perdue told WBTV: “Hell no.”