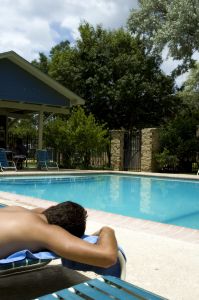 Some experts interviewed by the staff at Good Morning America are now saying that the active chemical used in spray tans, dihydroxyacetone (DHA), could potentially cause serious health issues for users.

Originally approved by the FDA back in 1977 for “external” use, DHA was previously used as a topical lotion that became unpopular due to its blotchy orange appearance. In recent times, spray applications that utilize DHA have enabled the chemical to maintain a more even and all around appearance. These changes in the method used for administering DHA have led to a resurgence in the chemical’s popularity. The problem that has arisen regarding its safety is due to the new mist-like application process for spraying on tans using DHA.
When the FDA first approved use of the chemical back in the 1970s, it never imagined that DHA would be applied across the entire body with a misty spray. The FDA now says that DHA should never be inhaled or ingested, something far more likely to happen given the new application method.

Most people are unaware of the potential health risks associated with the chemical and most spray tanning sessions happen in small, confined spaces all while being totally consumed by the mist. The vast majority of tanning salons fail to properly educate their patrons before tanning sessions so many users fail to properly protect their eyes, nose and mouth from the harmful chemical.

The Food and Drug Administration has revised what it says about DHA and now tells consumers “the use of DHA in ‘tanning’ booths as an all-over spray has not been approved by the FDA, since safety data to support this use has not been submitted to the agency for review and evaluation.”

The worry about DHA is that when it is inhaled into the lungs the chemicals goes immediately into the bloodstream. Some experts fear that this could lead to potential increases in cancer, tumors or DNA damage. Others say the real worry is that DHA has not been adequately tested for its current use and therefore its impact is largely unknown. It’s important to understand to that spray tans might not be the harmless alternative to tanning that many believe they are.