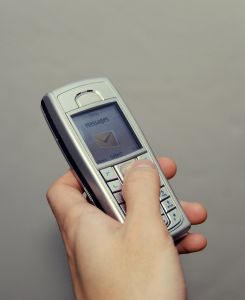 According a recent article on Law.com, a recent New Jersey case dealt with the interesting issue of liability for an accident caused by texting. This might not sound so novel, but what makes this case different than others is that the person who was texting the driver was also sued for damages.

The accident happened in 2009 when a teen boy was driving home from work while texting his girlfriend. His car crossed the centerline and he crashed into two motorcyclists. The husband and wife he hit both lost parts of their legs in the horrible crash. The teen admitted that he was distracted by his phone and pled guilty in his criminal case to using a cell phone improperly and to careless driving. He is now on probation and required to educate other teens about the dangers of texting and driving. A civil case is currently pending against him.

Though New Jersey currently has a law against texting and driving, making the driver guilty, the attorney representing the victims tried to take it a step further. On behalf of his clients, the attorney filed a lawsuit against the teen’s girlfriend who had been texting him while he was driving. The attorney’s argument was that the girlfriend knew the teen was driving, so she knowingly distracted him with texting while he was behind the wheel, thereby helping to cause the car accident.

The lawsuit attempted to charge the teen girl with aiding an abetting. She was the one who started the text messaging exchange and she testified that she may have known he was in the car at the time, the victim’s attorney said she was partially at fault.

The female teenager’s lawyer said that she was not responsible because she had no idea when or where the teen driver would ultimately receive, read, or respond to the message. The judge disagreed with the victim’s attorney and dismissed the claims against the teen girl who texted the driver. He stated there was no case law regarding this situation and that if this suit was allowed to continue, it would open up the possibility for hundreds of lawsuits against people or things that distract drivers every day. The victims’ attorney plans to appeal the decision, but notes that even if they do not win, he hopes that people will think twice before sending a text to someone may be driving at the time.

If you, or someone you know, have any questions regarding personal injury claims, please feel free to contact the experienced car wreck lawyers in Charlotte, North Carolina at Arnold & Smith, PLLC for a free consultation. Call at 704-370-2828.