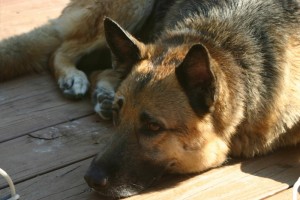 The four-year-old was outside playing with another young child when the dog launched its attack. The grandfather stated in reports that he believes that the dog noticed the two young children playing and must have thought one was in danger. The grandfather only has one leg, but did have his prosthetic on and was able to get to the dog as quickly as possible. The dog then attacked the grandfather as he tried to pull the dog from the young child’s throat. Finally, the child’s grandmother arrived on the scene and called the dog to stop. Thankfully it did.

Even if strict liability does not apply, a person attacked by a dog can still potentially recover under a negligence suit in North Carolina. Negligence is when an individual has breached a duty of due care owed under the circumstances, and that breach of duty causes injury to the plaintiff. The key question in dog bite cases is generally whether the person’s (defendant’s) conduct in the relevant situation is consistent with that of a reasonably prudent person.

Without any further information it is hard to tell whether the dog would be considered a “dangerous dog” for purposes of the strict liability statute. If the dog had inflicted serious injury to another person in the past, it would not matter whether the owners’ acted in a “reasonably prudent fashion.”  It seems like since the dog was a trained attack dog that only listened to one owner, leaving the dog outside around young children without the presence of that owner may not have been reasonably prudent conduct.

It is important that dog owners supervise their dogs when they know the dog could potentially be dangerous. Not only could owners be exposed to financial liability, owners could potentially be held criminally liable for their dog’s actions. The other consideration is when parents are taking a child to visit other homes, they should ask plenty of questions concerning the safety of the home, and specifically whether any dogs may be dangerous on the premises. Do not let children interact with an animal when they are out of your supervised reach. If your child is bitten and injured by a dog, call a lawyer to discern your rights.

By Gennykevin (Own work) [CC BY-SA 4.0 (http://creativecommons.org/licenses/by-sa/4.0)], via Wikimedia Commons