It took three months and a court order, but the Santa Cruz, California Police Department tracked down video taken onboard the yacht owned by Google X executive Forrest Hayes. Google’s top-secret “X” office is “where the firm makes unimaginable inventions like Google Glass and driverless cars a reality,” according to the Daily Mail and New York Post. Hayes worked there until his sudden death in November 2013. 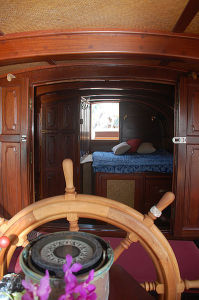 Hayes, a 51-year-old father of five, met 27-year-old Alix Catherine Tichelman on the website Seeking Arrangement. Some media reports on the Hayes case say he was married at the time of his death, while others say he was divorced. CBS News reports that Hayes’ wife sounded the alarm when he did not return home on November 22.

No one disputes that Hayes met Tichelman on Seeking Arrangement. That site pairs wealthy so-called “sugar daddies” with younger, attractive “sugar babies” for “mutually-beneficial relationships.” The site pairs almost exclusively older men with younger women, according to the Huffington Post.

Hayes, a native of Dearborn, Michigan, had worked in the auto industry before joining Apple and then Google. After meeting Tichelman on Seeking Arrangement, Hayes exchanged texts and emails and met with her several times before an encounter on his yacht on November 22, 2013.

At around three o’clock the next morning, contractor and part-time heavy metal singer Chad Cornell received a call from a frantic Tichelman, who said some of her friends had been doing hard-core drugs, which made her uncomfortable, and she had left. Cornell said he was Tichelman’s boyfriend at the time. He told the Daily Mail he had no idea Tichelman had been meeting men on Seeking Arrangement and working as a high-end escort. A few months later, Cornell broke off the relationship when he found Tichelman taking money out of his wallet.

Hayes had outfitted his 46-foot yacht with a $200,000 security system fitted with high-definition cameras. One of those cameras captured the last moments of Hayes’ life.

Clark said the video appears to show Tichelman injecting herself with heroin and then injecting a “nervous” and “uncertain” Hayes. The video shows Hayes “almost immediately” going “into distress.”

Instead of helping Hayes, Tichelman is seen cleaning up the drugs and wiping away fingerprints. As she prepares to leave the scene, she can be seen walking around the cabin of the yacht, wine-glass in hand, repeatedly stepping over Hayes’s lifeless body. As she leaves the yacht, she lowers a blind “to conceal the victim’s body from outside view,” according to a police statement.

“Yep,” quipped Wade. “Forty percent of the guys are married.” Wade said there was no indication from Tichelman’s profile that she was soliciting money for sex.

Tichelman made the 911 call after she said she discovered Riopelle’s lifeless body. Police are taking a fresh look at that case.