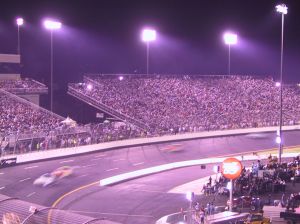 The Charlotte Observer recently reported on the tragic accident at Charlotte Motor Speedway that resulted in the deaths of two people. The accident happened on Saturday, March 31, 2012 at the end of Vietnam Veterans’ Homecoming Celebration. At the end of the event, thousands of motorcyclists were supposed to slowly process out of Charlotte Motor Speedway. Some of the riders, however, did not leave and that is when things turned tragic.

About thirty minutes after the celebration ended, several of the riders continued doing laps around the track. Some of them were going in opposite directions. Then, in an instant, two motorcycles crashed into one another. Two veterans were rushed to the hospital. Sometime later, Alan Mockus and Thomas Hollingsworth died from their injuries. Mockus’s wife, Debra, who was his passenger at the time of the accident, is in critical condition at Carolinas Medical Center.

The Concord Police had officers at the track at the time of the incident but they have not provided much information. Officials at the motor speedway are also being fairly tight-lipped, aside from the vice-president of communications, Scott Cooper, releasing a statement that the speedway is participating in the investigation and “cooperating fully” with the Concord Police Department. In that statement, Cooper also indicated that there were safety measures and procedures in place, seemingly denying any potential liability for the accident.

One of the coordinators for the event explained that the riders were informed of the rules of celebration. They were supposed to only go 35 miles per hour and they were not to go onto the actual track, but they were to stay on the apron, just below the track. The coordinator said that the victims did not follow the rules and that is why they were injured and eventually died. “It is extremely unfortunate that these individuals could not abide by guidelines set for their own safety.” The motorcyclists took a lot of unnecessary risks and suffered the consequences of failing to abide by the safety guidelines.

At least one person believes that the organizers should have done more to prevent the accident. Cindie Spada, the Mockuses’s niece believes that the organizers of the event should have known people’s nature to want to ride on the actual speedway. She believes that the participants should have been prevented from using the speedway at all. As of now, there have been no claims filed against anyone for the death of the victims. It is unlikely that anyone will have any liability because of the safety guidelines in place and the victim’s disregard for those guidelines. If you or someone you know need the services of a personal injury lawyer in Charlotte, North Carolina, please contact the motorcycle injury attorneys at Arnold & Smith, PLLC at 704-370-2828.