The Color Run has exploded since its inception in 2011, marketing itself as the “Happiest 5k on the Planet” and the world’s largest single event series. Runners wear white at the starting line and brightly colored powders are shot into the air throughout the run, speckling everyone with rainbow hues. The runs take place in over 40 countries across the world each year and are increasingly popular amongst young people. Charlotte, North Carolina’s next Color Run is actually this coming month on April 30. 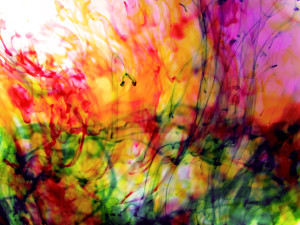 At these events, the thinking goes that the more colors you get drenched in, the better—that’s kind of the point. Color Runs are untimed events that make the run much more of a party than a race. Each kilometer, the runners are doused in different colors before arriving at the massive festival at the finish line. The finish line party continues into the night after the run with music, dancing and “glowtastic” color zones marketed as photo opps. Currently, each runner also receives a limited edition Night Race kit that includes a glow-in-the-dark tee, black light headlamp, and a “one of kind” packet of glow-in-the-dark powder.

But just how safe are these chemicals? Glow-in-the-dark paint? Colored powder blown at you as your lungs are already working overtime? Event promotors for the Color Run use words like “non-toxic” and “safe” to describe the powders their races use. However, a NewsChannel5 report investigated the issue last year and came back with some potentially troubling results.

First, no matter what the powdered colors are made of, inhaling that amount of powder is problematic for anyone’s lungs, especially for children, doctors interviewed in the report opined. Race promotors recommend that runners use a bandana, but scientists say that much of the particulate in the colored powders is so fine it will go straight through a bandana.

An even more disturbing reveal came when NewsChannel5’s report asked an analytic chemist to analyze almost a dozen samples of the colored powders used at Color Runs. Although many of the powders were revealed to have the chemical structure of relatively benign corn starch, 2,000x magnification showed that one of the pink powders is made up of sharp, jagged, needle-like particles. The scientist evaluating it said the chemical composition of that pink powder and one of the green powders analyzed most closely matches that of rat poison.

The Color Run advertises the powders as “cornstarch-based,” ”dyed with “food-grade” dyes, and gluten-free.

Further troubling in the scientists’ study was that even the powders that were primarily composed of cornstarch still contained other solvent materials and metals such as cobalt. Solvents are typically highly volatile and can be very flammable.

The studies are preliminary, and the scientists said that further studies are needed to determine the definitive long-term effects of the powders.

The NewsChannel5 study and report did not examine the chemical construction of the “one of a kind” fluorescent powders the Color Run uses in its after-race parties once the sun goes down.

The idea behind the events is a good one: the organization obviously encourages people to adapt a healthier lifestyle and gets people excited about exercise. The Color Run has also donated more than $4 million to charity since its first run. The information from the NewsChannel5 article does make one wonder if the potential health risks could be worth the risk.

Before entering all participants are required to sign a fairly comprehensive waiver that waives the Color Run’s liability for, among other things, any complications arising “from color on clothing and person.” However, if further studies corroborate the preliminary findings in the study discussed above, the organization could potentially be found liable for dishonest advertising and negligently or intentionally injuring participants by exposing them to unreasonably harmful materials.

Cosby, Clinton and Others Use Homeowner’s Insurance To Pay Their Personal Injury-Related Legal Bills