A Texas mother and her two sons who were injured when a Sanderson Farms employee slammed into the back of their car almost three years ago just settled their lawsuit with the poultry processing giant for $27.5 million. 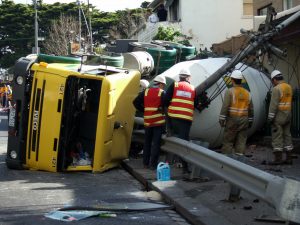 One of the injured boys in the crash was two weeks old at the time and suffered very severe brain damage that will almost certainly leave him incapacitated for the rest of his life. The child is now almost three and cannot crawl, walk or speak.

The mother suffered a compound fracture to her arm. Her older son, two at the time, sustained only minor injuries.

The Sanderson Farms truck was traveling 57 mph when it struck the woman’s car, knocking her vehicle into oncoming traffic. The family’s lawsuit against the farm alleged that Joshua Frank Perkins, the truck’s driver, told several different versions of how the wreck occurred, but later told his girlfriend that he fell asleep behind the wheel.

The lawsuit also alleged that in the days leading up to the crash, Perkins worked long and irregular hours that disrupted his sleep patterns. Perkins said that on the morning of the accident he got up around 5:30 to travel to a chicken farm in a neighboring town by 6:30 or 7. He said that he normally worked between 10 and 16 hours a day. Records showed that in the week before the wreck, Perkins had worked almost 70 hours.

The family’s attorneys have asked that the plaintiffs be identified only by their initials as the children are both minors. After settlement was approved by the judge, an attorney for Sanderson Farms said the settlement showed the company’s commitment to stepping up and taking responsibility to see that the severely injured boy would be taken care of for the rest of his life.

The settlement will be paid from three of Sanderson Farms’ insurance companies. An attorney for the family said that the settlement proceeds will be divided into a three trust accounts from which the family can draw for the two boys’ long-term health and educational needs.

This case demonstrates well the theory of vicarious liability, under which an employer can be held liable for the actions of its employees while they are acting in the course of their employment. Because Perkins was 1) driving a Sanderson Farms truck and 2) driving to the neighboring chicken farm as part of his job, Sanderson Farms was liable here.

A consideration in whether vicarious liability exists is typically whether the employee’s actions were foreseeable in their regular course of employment. Although it is unclear whether the parties discussed this, the fact that Perkins worked such long hours may well have been a consideration in finding that falling asleep behind the wheel should have been foreseeable.

Plaintiffs in vicarious liability cases in an employer-employee context also usually have the right to additionally sue the employee. However, in this and many other cases, suing an employer results in a much greater damages award because employers typically have far deeper pockets and insurance to limit their financial loss. As the third largest poultry producer in the United States, Sanderson Farms is an excellent example of this.

At the time of the wreck, the infant was in a car seat in the back of his mother’s vehicle. The lawsuit indicated that he suffered a fractured skull, collapsed lung, and catastrophic brain damage that caused half of his brain mass to die in one hemisphere and about a third to die in the other hemisphere.