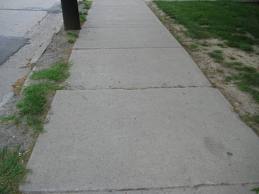 WBTV reports that the Charlotte City Council voted on Monday, March 26, 2012, to find some money in the city budget to fix some of the troubling city’s sidewalk problems. One of the city’s major reconstruction projects came in significantly under budget, so there are several million dollars available to fix some of the other problems in the city.

There are four sidewalk locations in the city that are a priority for the city. The first is a portion of West Tyvola Road. Two young boys were killed after they were hit by a delivery truck driver at that location walking with their father. One day after the fatal accident, the boys’ father pleaded with the city to add sidewalks to that street to make it safer for pedestrians.

In East Charlotte, the neighbors pleaded for more sidewalks after 17-year-old Brittany Palmer was killed after being struck by a car while she was standing in front of her high school. The section of the road at that location at East Sugar Creek Road is the first priority for the city council.

There are two other locations that are due to receive some much-needed sidewalks: Caramel Road between Colony and Sharon View and Nevi Road, near Lake Drive. The lack of sidewalks at these locations forces pedestrians to walk in the street, which forces drivers to be particularly cautious. Many times drivers are too distracted and do not pay attention to their surroundings.

The addition of sidewalks is not always met with such enthusiasm. Some residents have actually complained about losing trees in their neighborhood or having their property damaged by the addition of the concrete. However, the city is going to move forward in its attempts to make pedestrians safer.

If you or someone you know have been the victim of any kind of personal injury, please contact the Charlotte personal injury attorneys at Arnold & Smith PLLC at 704-370-2828. They will work hard to get you the compensation that you deserve for the injuries you have sustained.